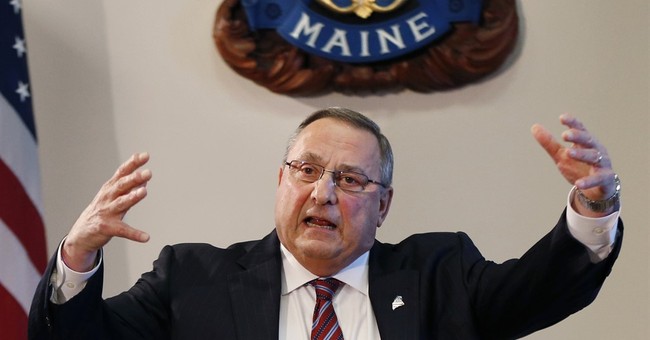 Maine Gov. Paul LePage (R) is certainly no stranger to speaking what's on his mind, no matter how controversial that may be. On Tuesday, LePage proposed public executions via a guillotine for people who are caught trafficking drugs into the state.

"I think the death penalty should be appropriate for people that kill Mainers," LePage said Tuesday during a radio interview on WVOM. "I'm all in."

LePage also suggested lethal injections, saying: "Actually, if you want my honest opinion, we should give them an injection of the stuff they sell."

"What I think we ought to do is bring the guillotine back," LePage quipped later, unprompted, as the radio hosts offered tempered laughs. "We could have public executions."

The governor's office said the remark was a joke illustrating LePage's support for stricter penalties on drug crimes, according to the Associated Press.

Maine abolished the death penalty in 1887 and last executed someone in 1885. All executions in the state have been for murder or treason.

The state has been particularly hard hit by opiate addiction in recent years. Maine saw a record number of drug overdose deaths last year, and eight percent of babies born in the state in 2015 were born affected by drugs.

While it's incredibly unlikely that Maine will bring back the death penalty--never mind public executions for drug dealers--the state has to find some way to deal with this major issue.

UPDATE: Speaking today, Gov. LePage suggested that Mainers use their constitutional carry rights (which the state just affirmed last year) and "load up and get rid of" people who sell drugs.

.@Governor_LePage on drug dealers: "everybody in Maine, we have constitutional carry. Load up and get rid of the drug dealers." @NECN

(This author advises against taking this route)