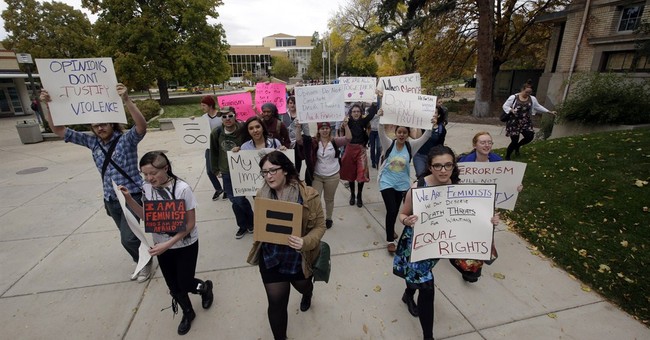 File this one under "Not The Onion": Clapping has been discouraged at the U.K.'s NUS Women's Campaign Conference (a conference for feminist university students in the United Kingdom) due to the fact that it may be triggering anxiety among delegates. Attendees are now encouraged to use "feminist jazz hands" to display approval of a speech or topic.

Some delegates are requesting that we move to jazz hands rather than clapping, as it's triggering anxiety. Please be mindful! #nuswomen15

This came about following a tweet from Oxford University's Women's Campaign saying that some of their members were bothered by clapping.

@nuswomcam please can we ask people to stop clapping but do feminist jazz hands? it's triggering some peoples' anxiety. thank you!

Whooping is fun for some, but can be super inaccessible for others, so please try not to whoop! Jazz hands work just as well #nuswomen15

Both of these accounts appear to be "legitimate" and not parody accounts lampooning feminism.

Some Twitter users were amused with the request for "feminist jazz hands":

Conquering the world is going to be so, so much easier than I originally anticipated: https://t.co/UDhQdIbgbi

I'm all for equality. This is not equality - this is delusional. #nuswomen15 https://t.co/TaxAeICYEw

@nuswomcam As a feminist I'd like to say two words: woman up.

As a woman, feminist, and someone who has struggled mightily with anxiety, I think the "feminist jazz hands" request is more troubling than anything else. A person who is that disturbed by clapping should seek therapy and medication first and foremost. They desperately need some sort of mental health care. The world isn't a safe, quiet bubble full of Play-Doh and craftivism projects. The real world is (sometimes) scary. It's crowded. It's loud. Sometimes people clap in public. A person, especially an aspiring activist for any cause, not just feminism, should learn how to effectively manage and deal with their anxiety triggers rather than make everyone else comply with their demands. The "real world" isn't as accommodating as a feminist conference.