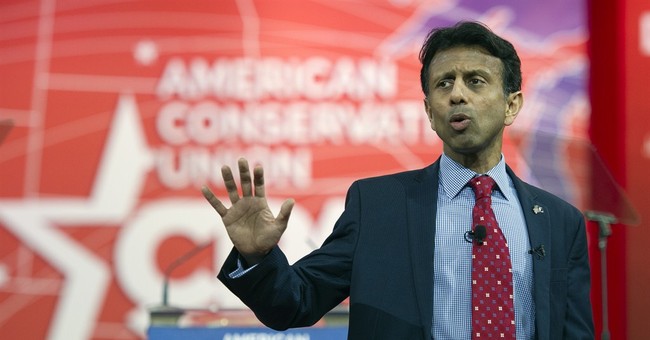 Louisiana Governor Bobby Jindal (R) stuck to three big themes during his speech yesterday at CPAC: Obamacare must be repealed, Common Core and the federal government have no business in the classroom, and radical Islam is a dangerous threat to America that needs to be handled by a competent leader.

Jindal emphasized that "we must repeal every single word of Obamacare," and hit on Republicans in Congress for "waving the white flag of surrender" on amnesty and Obamacare. Jindal made it clear that the 2014 elections were about "taking our country back," which, according to the governor, begins once Obamacare is repealed.

Jindal's focus then shifted to Common Core, and he noted that he's suing the federal government over the regulations. He said that he believes that parents and teachers at the local level do a far better job of dictating curriculum content than the federal government does. Additionally, Jindal was concerned as to what would happen if Common Core standards were applied to the U.S. History curriculum, saying that American exceptionalism would be replaced with victimization.

Jindal's third point was the threat of ISIS and other radical Islamic groups throughout the world, saying that Americans need to face the reality of "the evil that is radical Islamic terrorism." He criticized President Obama's failure to properly identify radical Islam as the motivating force behind ISIS, and said that he was "tired of hyphenated Americans"--meaning that he feels as though identifying as a united American population is more beneficial than dividing amongst ethnic backgrounds.

As for 2016, Jindal said that he expects to have a decision made about his potential run in the next couple of months, and that he has been praying over the matter with his wife.