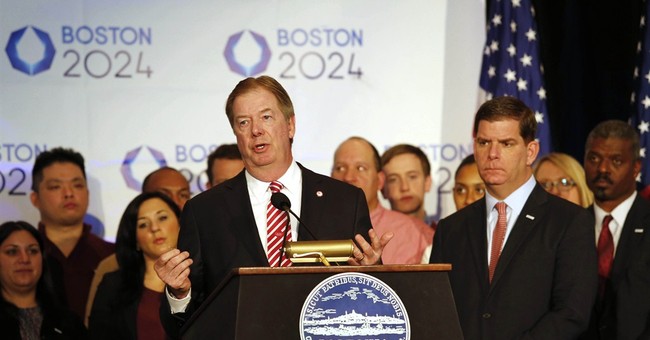 Yesterday, the United States Olympic Committee (USOC) selected Boston as its bid for the 2024 Summer Olympics. Boston beat out D.C., Los Angeles, and San Francisco, and will be submitted to the IOC for the final bidding process to determine the location of the Olympiad. The IOC will award the winning city the games in 2017. The USOC's past two bid cities (New York in 2012 and Chicago in 2016) both finished fourth in the final bidding process, but there is hope that Boston's comparatively frugal approach to the games will make the city an attractive candidate.

According to ESPN, the selection of Boston was somewhat of a surprise.

U.S. Olympic leaders surprisingly cast their future with Boston on Thursday, hoping a compact, college-centric bid with a touching story to tell will overshadow the city's well-organized protest group and convince international voters to bring the Summer Games to America after a 28-year gap.

During a daylong meeting at the Denver airport, U.S. Olympic Committee board members chose Boston, with its promise of frugality, reusable venues and inspiration after its comeback from the marathon bombings, over Los Angeles, San Francisco and Washington for its 2024 bid.

"Today's selection by the USOC is the beginning of an incredible opportunity for Boston," said the city's bid chairman, John Fish, who will be part of a celebratory news conference Friday with the USOC leadership.

Boston 2024 bid included plans to utilize existing facilities (including dorms belonging to area colleges) to host athletes and fans, and the Olympic Stadium would be reused to host one of the city's sports teams. Other venues would be temporary, to avoid the "white elephant" dilapidated eyesores that have plagued past Olympic venues.

Boston's bid did not come without controversy. Questions still remain as to how the city will pay for the necessary infrastructure improvements, as well as the hassles that come with hosting a month-long major athletic event. The Olympics are expensive--Montreal, for instance, finished paying off the debt from the 1976 games in 2006. Hosting the games is a huge financial risk, and it's not clear that the glory of hosting is worth the economic gamble.

The United States last hosted the Summer Olympics in 1996, in Atlanta.