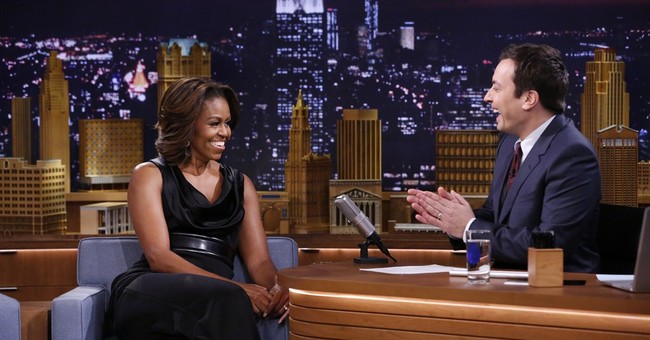 Speaking on The Tonight Show with Jimmy Fallon last night, the First Lady said that young people are "knuckleheads" who need Obamacare.

I'm sick of this ridiculous condescending rhetoric coming from the White House regarding my generation. It's offensive, unnecessary, and arrogant — and as Fallon pointed out, older people cut themselves on knives all the time.

Look. I'm a young person. At 22, I'm the youngest member of the Townhall editorial team. If I wanted to, I could have stayed on my father's insurance plan for another four years — but since I'm fortunate enough to be employed, I didn't. I also cook fairly regularly, and I've never managed to slice my finger open with a knife, mostly because I'm a responsible woman who exercises caution around sharp blades. When I go to bars, I tend to keep both feet on the ground and avoid dancing on things that aren't a dance floor. Between this and the horrendous Brosurance ads, it is clear that this administration thinks that my generation is a bunch of idiots.

Considering that Obamacare is on the verge of falling apart because youth enrollment is so much lower than expected, one would think that the Obama administration would be a bit gentler with their sales pitch to young people. Nobody likes being called a knucklehead.