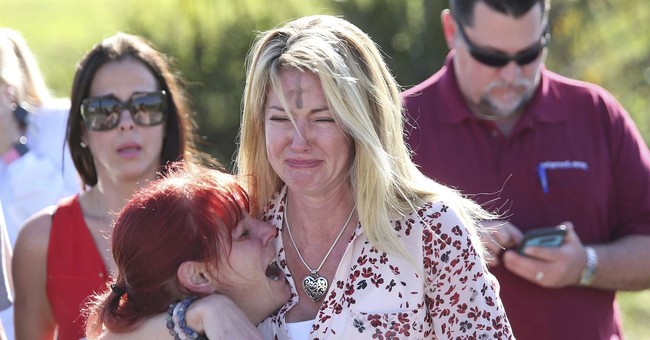 As the story about the horrific mass shooting in Parkland, Florida was still developing today, CNN didn't even wait for all the facts to come in before beginning its push for a “discussion about guns."

At 3:17 PM EST, CNN National Security Analyst Juliette Kayyem made her gun control pitch by misinforming the network's viewers, claiming that America is "the only nation that has this kind of violence." According to NewsBusters, which transcribed the relevant segment, Kayyem said:

Yet again, you cannot have these conversations with at least saying every time we are the only nation that has this kind of violence and presumably gun violence, obviously, in particular focused on our children. It is just ridiculous. My daughter is coming home from an urban high school in the next 20 minutes. It's — it’s like no other country lives or allows themselves to live and here we are, another time, having a discussion about guns as being a security issue for our children.

I know. I was just talking to a seven-year-old on my show this week who lost her six-year-old friend at a school shooting in South Carolina. She wrote a letter to the President and I couldn't have put it better. You know, the seven-year-old said Mr. President, how are you going to keep children safe in this country? But I want to stay on what we know.

Of course, mass killings with guns, bombs, trucks, and knives targeted against men, women, and children of all ages are not solely an American phenomenon.

In November 2015, Islamic terrorists killed 130 people in attacks that were coordinated across Paris. Of that number, 89 people alone were killed in the Bataclan theater in a mass shooting committed with illegally obtained rifles. According to the respected German magazine Der Spiegel, the Paris attacks were not uncommon in this regard:

In total, Islamists wielding firearms killed 150 people and wounded 400 in Western Europe in 2015. That includes the January attacks in Paris on the editorial offices of the satirical magazine Charlie Hebdo and on the Jewish supermarket. It includes the November massacre in the Bataclan and the Kalashnikov attacks on Paris street cafés. It includes the February attack on a synagogue and café in Copenhagen. And the failed, would-be mass murder on the high-speed Thalys train from Amsterdam to Paris. As the attacks in Brussels on Tuesday have once again made clear, Europe and the Europeans have lost their sense of security: The hope that they could keep terror at bay has been exposed as an illusion. The symbol for this lack of security is the illegal weapons market -- a market that the authorities do not have under control.

If you want to focus in on school shootings very specifically, those also happen in countries other than the United States.

In the past three years alone, Mexico, Brazil, and Canada have all had to deal with school shootings that resulted in fatalities. The Canadian school shooting in question was reported by CNN at the time:

Four people were killed and an alleged shooter was arrested Friday after gunfire erupted at a school in a small town in northern Saskatchewan, Chief Superintendent Maureen Levy of the Royal Canadian Mounted Police said Friday night.

Levy said authorities received a call about 1 p.m. Friday saying a weapon had been discharged at La Loche Community School in La Loche. Officers went to the school and at 1:47 p.m. arrested a suspect and seized his weapon.

In the meanwhile, China, which does not allow average citizens to possess firearms, has long had troubles with mass stabbings. In one of the worst recent cases, a 2014 mass stabbing in Kunming province, knife-wielding men killed 29 people and wounded 130 more.

If CNN's crack analysts can figure out some revolutionary new way to identify evil people who are willing to commit these atrocities, no matter what weapons they have at their disposal, every sane person would surely love to hear about it. Before that happens though, perhaps any real discussion about gun control and mass killings should start with the facts?