Will the President Golf During the Shut-Down? 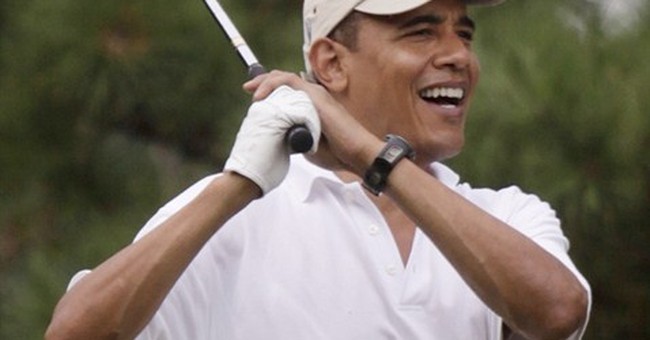 Even as the World War II memorial is wired shut and troops serving overseas are being deprived of NFL and baseball games, and 800,000 federal employees are not being paid, the 250-person staff of the presidential retreat Camp David remains on-duty with pay.

The President has now cancelled his trip to Asia and will stay home -- for what isn't clear, since he has announced he won't negotiate with the Republican House (which has passed bills to fund veterans, the NIH, and national parks and other expenses).

So here's what I'm wondering: While his administration is attempting to extract maximum pain from the public as a result of the shut-down, does he himself plan to give anything up? He headed out to golf last weekend as shut-down loomed -- the 146th time the President has played golf.

As kids with cancer go without funding (despite GOP efforts, because Senate Majority Leader Harry Reid wants to know, "Why would we want to do that?") inquiring minds just want to know: Will the President golf during the government shut-down?