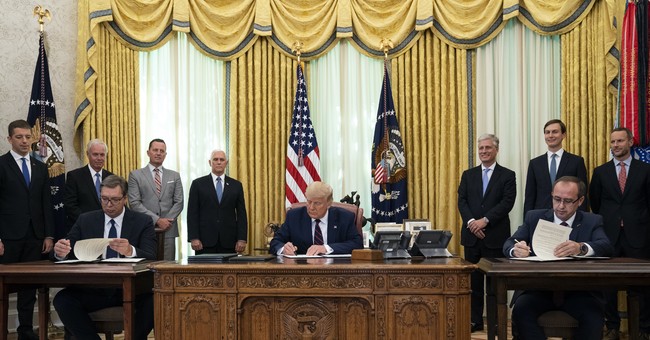 It looks like Trump broke The Atlantic. In an all-out effort to defeat the president and oppose everything Trump does, The Atlantic has come out against the Nobel Peace Prize and even the pursuit of world peace. You can't make this stuff up.

"The Trump nomination shows that peace had its chance, and blew it," reads the subtitle.

On Friday, President Trump received a second nomination for the Nobel Peace Prize from Swedish Parliament member Magnus Jacobsson for the Trump administration's brokering of a historic accord between the countries of Kosovo, Serbia, and Israel. Earlier this week, the president was nominated for the prestigious award by a member of the Norwegian Parliament for brokering another historic peace agreement between Israel and the United Arab Emirates.

"If Trump wins the prize, it will be the fourth Nobel awarded for peace between Israel and its neighbors," the author complains.

Who would the author rather see the prize go to? No one!

"Giving the peace prize to no one at all is a tradition the Nobel Committee should revive, perhaps on a permanent basis," Wood writes.

The author's Trump Derangement Syndrome knows no bounds. Anything involving Trump is bad to this author and must be outlawed, even if it's world peace.

With such obvious hatred for the president over at The Atlantic, it's no wonder the media outlet recently ran a widely discredited, anonymously sourced hit piece on President Trump. The Atlantic appears to have made up out of whole cloth the allegation that President Trump called fallen World War One soldiers buried in France "suckers" and "losers."

The press has abandoned any notion of journalistic integrity and has gone all-in for the Democratic Party. Attorney General William Barr spoke exclusively to Townhall on Friday, sharing his thoughts on some of the problems with today's liberal media.