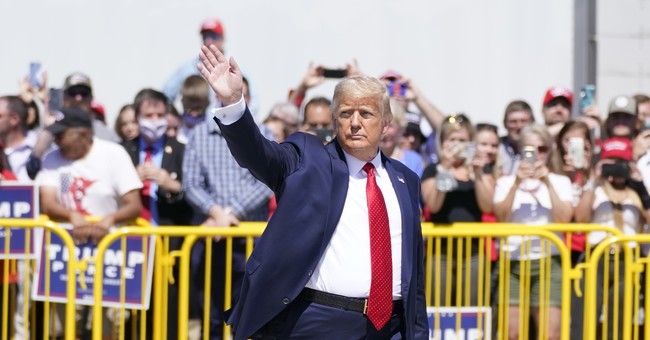 I mean, are they this desperate? Is the liberal media that nervous about Trump winning again? Because it would seem that they are throwing all the things against the wall to slow the momentum. The Atlantic is the first batter up, peddling a totally unverifiable story that President Trump has mocked and denigrated those who have served and died for this country. Yeah, they actually thought this would stick. The U.S. Military loves Trump, by the way. I don’t really see the point behind this story other than some pathetic attempt to smear the man yet again. Oh, and we have the anonymous sources, those shadowy folks with “firsthand knowledge.”

Right, find me a career bureaucrat in this town that loves Trump. The whole town hates him. Run with a rumor and find several people who hate Trump’s guts to ‘verify’ it. It’s as easy as scooping up baitfish in a tank.

If we’re going by this shoddy standard, then several people told me that Joe Biden is dead and being impersonated by a body double. They have firsthand knowledge. That’s what they told me, so it’s totally true. Also, the British Royal Family is really reptilian shape-shifting humanoids. We’re dealing with clowns.

When President Donald Trump canceled a visit to the Aisne-Marne American Cemetery near Paris in 2018, he blamed rain for the last-minute decision, saying that “the helicopter couldn’t fly” and that the Secret Service wouldn’t drive him there. Neither claim was true.

Trump rejected the idea of the visit because he feared his hair would become disheveled in the rain, and because he did not believe it important to honor American war dead, according to four people with firsthand knowledge of the discussion that day. In a conversation with senior staff members on the morning of the scheduled visit, Trump said, “Why should I go to that cemetery? It’s filled with losers.” In a separate conversation on the same trip, Trump referred to the more than 1,800 marines who lost their lives at Belleau Wood as “suckers” for getting killed.

They’re not even trying to make their anonymous fake news believable anymore. Goldberg and his ilk are just mad that Trump has refused to create thousands of more dead soldiers by sending them off to fight ill-advised new wars all over the world. https://t.co/SYFwzHIHCk

I'm confident I have better sources within this White House than @JeffreyGoldberg, and I expect that upon investigation his anonymously sourced story will live up to the quality we can expect from The Atlantic under his leadership.

Does this hoax have a name yet? https://t.co/qOolDPhACp

I remember being a reporter and having breaking stories and being told I couldn't publish them without a single person on record. The fact that they published this with no one on record is complete journalistic malpractice. https://t.co/SkcuYTps9q

Not a single source is on record to verify these statements. They’re getting desperate. https://t.co/pAxyQHDTt1

You know I'm not disinclined to believe stuff like this about Trump, but my trust in media has eroded to the point where listing explosive claims and chasing it with "we spoke to 4 people who know and they confirmed this" just won't cut it for me anymore. https://t.co/C6N8YMiGjg

But it's so yummy to believe something when you hate the person.

How many conspiracy theories and hoaxes have the liberal media fallen for in the past four years? First, there was Trump-Russia collusion, which was busted like a pinata. Then, the covert plot to destroy the US Postal Service, which the Left still thinks is a thing. Then, there’s the ‘Trump had a stroke’ story. It goes on and on, and these morons wonder why their trust with the American people is in the toilet. Here’s the thing. How about y’all stop lying. Then again, we all know why you keep getting faces full of buckshot. You don’t care. You’ve never cared. Because at the end of the day, you’re all just Democratic operatives masquerading as reporters. If you were just honest about your biases, then this war would end, but your attacks on Republicans would seem less credible, right? I mean, they already are, but there’s a shine to it when it’s printed on The New York Times or in this case, The Atlantic.

Also, let's not forget that this same publication ran with a fake news story about a police shooting this summer. Have we forgotten that, and we're supposed to believe this crackpot story? Nope.

Since a lot of people are talking about @TheAtlantic tonight, recall that just a few weeks ago one of its writers, claiming to be an eye witness, fabricated a story about a uniformed cop shooting an unarmed black child and getting away with it. https://t.co/TAViApGYCr