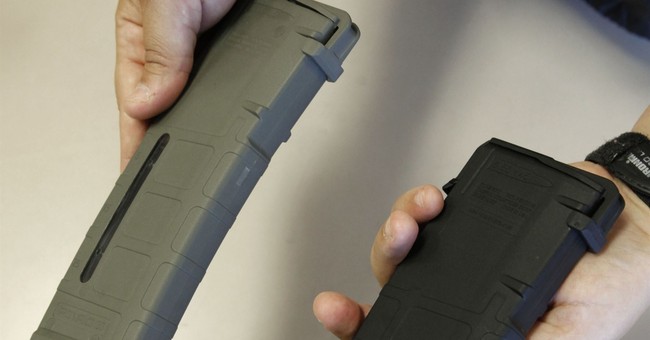 The Second Amendment scored a victory in court on Friday. The 9th Circuit Court of Appeals invalidated a California ban on so-called large-capacity magazines (LCM) that hold more than 10 rounds of ammunition.

The three-judge panel ruled that California's ban "substantially burdened core Second Amendment rights" and "struck at the core of law-abiding citizens to self-defend by banning LCM possession within the home." The ban makes about half of all gun magazines in the country illegal to own in California and other states with similar bans on LCMs.

"This is a huge win for the NRA and gun owners nationwide," NRA spokesperson Amy Hunter said in a statement. "The 9th Circuit, which isn't often a favorable court for gun owners, ruled it is unconstitutional to place arbitrary bans on magazines that hold more than 10 rounds."

"The judge who authored the opinion in this case was appointed by President Trump," Hunter notes. "That means everyone who voted pro-gun in 2016 played a role in this significant win. It's a reminder to everyone: Vote in November. Your rights depend on it."

President Trump has already flipped one appeals court from a majority of Democrat-appointed judges to a majority of Republican-appointed ones. The president is now just two seats away on five additional courts from achieving Republican-appointed majorities, as reported by Fox News. A reelection win for the president would give conservatives a chance to flip most if not all federal appellate courts away from their Democratic-appointed majorities. And that means more sane rulings for years to come.

CBS5 in San Francisco reports that California Attorney General Xavier Becerra, who defended the unconstitutional ban in court, did not immediately comment on whether his office would ask the full appellate court for an appeal or appeal the decision directly to the Supreme Court. Becerra also did not comment on whether he would seek a delay of the ruling to prevent an immediate buying spree of LCMs.