So 130 Million People Could Starve Because of the Lockdowns 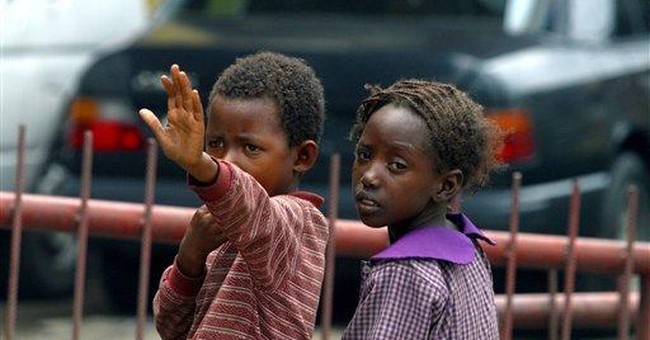 In many places throughout the world, starvation is a real threat when people are unable to freely leave their homes and provide food for themselves and their families. As countries continue lockdown measures designed to slow the spread of the coronavirus, the impact of those decisions may hasten the spread of catastrophic hunger.

A chief economist with the United Nation's World Food Program warns than an estimated 265 million people around the globe could face starvation by the end of the year, according to a new report in The New York Times. Already, 135 million people throughout the world are living in acute hunger. But that number is expected to nearly double as coronavirus lockdowns continue to disrupt global supply chains.

According to the report, the response to the coronavirus has already brought hunger to millions of people around the globe. In Kenya, two people died and dozens were left injured after a stampede resulted from a giveaway of flour and cooking oil in one of the country's largest slums. Thousands are now lining up in India twice a day for bread and fried vegetables, and Colombians have begun hanging red drapings outside their homes to indicate their desperate need for food.

The report cites experts who say various factors linked to the coronavirus pandemic are exacerbating the current hunger crisis. Millions who were already at-or-near poverty have suddenly lost incomes, tourism has dropped off depriving communities of hard currency, oil prices have collapsed, and the loss of money coming from family members working overseas are all fueling the crisis. As the pandemic continues, logistical problems in growing and harvesting crops and transporting food are expected to hit poor countries hardest, especially in developing countries where manual labor is relied on heavily to maintain the supply chain.

Already, from Honduras to South Africa to India, protests and looting have broken out amid frustrations from lockdowns and worries about hunger. With classes shut down, over 368 million children have lost the nutritious meals and snacks they normally receive in school.

Yet even if there is no major surge in food prices, the food security situation for poor people is likely to deteriorate significantly worldwide. This is especially true for economies like Sudan and Zimbabwe that were struggling before the outbreak, or those like Iran that have increasingly used oil revenues to finance critical goods like food and medicine.

In Venezuela, the pandemic could deal a devastating blow to millions already living in the world’s largest economic collapse outside wartime.

Uncertainty over food is also building in India, where daily-wage workers with little or no social safety net face a future where hunger is a more immediate threat than the virus.

As wages have dried up, half a million people are estimated to have left cities to walk home, setting off the nation’s “largest mass migration since independence,” said Amitabh Behar, the chief executive of Oxfam India.

“Instead of coronavirus, the hunger will kill us,” said Mr. Singh, who was hoping to eat his first meal in a day. Migrants waiting in food lines have fought each other over a plate of rice and lentils. Mr. Singh said he was ashamed to beg for food but had no other option.

“The lockdown has trampled on our dignity,” he said.

Airport closures are also restricting the supply of pesticides that could mitigate the ongoing locust plague that is taking a huge toll on agriculture in parts of Africa. And as millions become hungry and desperate, fear of political instability is also growing.

The coronavirus has so far reportedly killed over 182,000 people worldwide, and leaders have justified the lockdowns on the grounds that they save lives. But if more than one hundred million people will be thrown into acute hunger as a result of the lockdowns, not to mention the effects of political instability and other harmful consequences prolonged lockdowns may have, maybe the best way to save lives isn't as clear as some of our leaders currently believe.