China Reclassifying Dogs as 'Pets' Instead of 'Livestock' 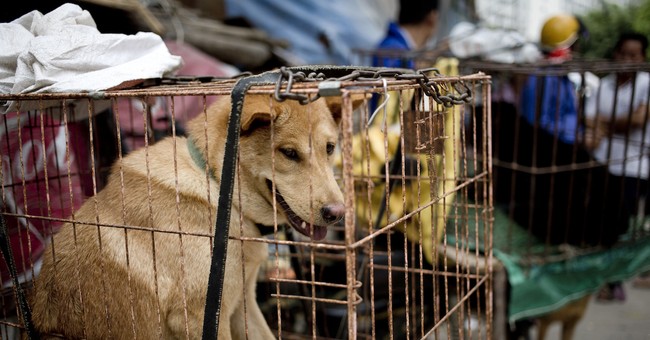 Having kicked off a global pandemic by selling wild animals for human consumption, China may finally be rethinking its policy of letting people eat whatever disgusting thing they feel like. Reuters is reporting that China is preparing to reclassify dogs from livestock to pets, even though dog meat remains a delicacy in many different parts of China.

"As far as dogs are concerned, along with the progress of human civilization and the public concern and love for animal protection, dogs have been 'specialized' to become companion animals ... and they will not be regulated as livestock in China," the ministry of agriculture in China announced in a statement.

In response to the coronavirus, believed to have originated from bats at a wet market in the city of Wuhan, the Chinese government has reportedly banned the practice of breeding, trading, and consuming wildlife, revoking all licenses associated with the trade.

According to the Humane Society International, an estimated 10 million dogs, some of them stolen pets, are killed in China for their meat every year. An annual dog meat festival is held every June in the Chinese city of Yulin.  A spokeswoman for the organization called the draft proposal a potential "game-changer moment for animal protection in China."

China has come under fire as the country's unsanitary wet markets are blamed for the thousands of coronavirus deaths around the world.

In a recent interview, Sen. Lindsey Graham (R-SC) called upon China to stop eating bats and other wild animals.

"We need to stop that," Sen. Graham told Fox News' Martha Maccallum. "It's the 21st century."