Senator Cornyn on Chinese Virus: 'That's Where It Came From' 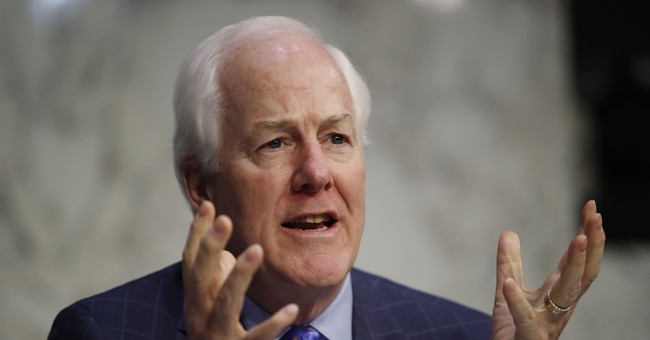 The media has been doing nothing to abate the full-blown panic that is sweeping across the entire country. The Wuhan coronavirus is a real threat and it will claim an untold number of lives, but somehow the media still has plenty of time to accuse the president of being a racist. Reporters are upset that President Trump is correctly identifying the origin of the global pandemic that has brought America's way of life and its economy to its knees. When asked about his thoughts on the president's use of the phrase "Chinese virus," Sen. John Cornyn (R-TX) said the president was right to hold China accountable for introducing COVID-19 to the world.

"That's where it came from," Sen. Cornyn (R-TX) told a reporter. "I think China is to blame because the culture where people eat bats and snakes and dogs and things like that -- these viruses are transmitted from the animal to the people and that's why China has been the source of a lot of these viruses like SARS, like MERS, the Swine Flu and now the coronavirus. So I think they have a fundamental problem, and I don't object to geographically identifying where it's coming from."

The Texas senator disagreed when the reporter began lecturing him about Asian Americans who consider the phrase "Chinese virus" to be racist.

"I disagree. We're not talking about Asians, we're talking about China where these viruses emanate from and which are creating this pandemic," Cornyn concluded.

It's important that Trump informs the public as to where the virus originated given that the Chinese government has been spreading propaganda claiming the Wuhan coronavirus originated in the United States. If China is going to keep introducing novel viruses to the world, they should at least show us the courtesy of taking credit for them.