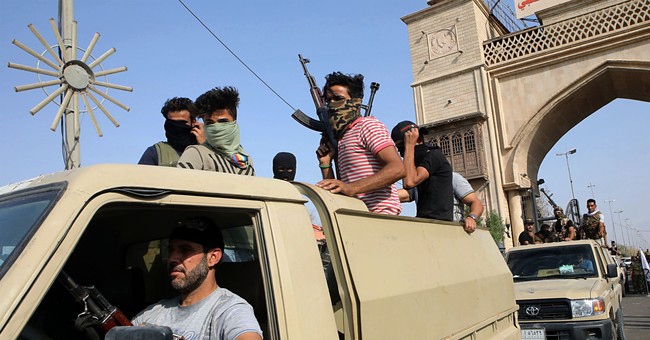 The Daily Mail is reporting that high-ranking Popular Mobilization Forces (PMF) leader Taleb Abbas Ali al-Saedi was killed in Iraq on Saturday by an unidentified group of gunmen.

Local media is reporting that Al-Saedi was "assassinated" by an unknown group of gunmen late Saturday night in the Iraqi city of Karbala, some 62 miles southwest of Baghdad, the Daily Mail said. Al-Saedi commanded the Karbala Brigades, an Iranian militia unit that is part of the larger Shiite PMF umbrella.

A commander of Abbas Ali Al-Sa'edi which is a Pro-#Iran #PMU has been assassinatedi in Karbala, #Iraq

Al-Saedi was the commander of Karbala Brigade.

There are additional reports that Al-Saedi was killed alongside two of his companions late Saturday night.

Reports are that he was shot dead. pic.twitter.com/5TCKNtG0iH

Four members of the PMF were killed in an airstrike last week, alongside Iranian Quds Force General Qasem Soleimani as their convoy departed from Baghdad International Airport. Abu Mahdi al-Muhandis, the Iraqi-Iranian leader who headed the PMF, was among those killed. Iran retaliated for the airstrike with attacks on two bases housing American troops in Iraq, but no Americans were killed. On Saturday, Iran admitted to 'unintentionally' shooting down a Ukrainian passenger jet just hours after firing missiles at the two bases in Iraq. All 176 people on board the plane were killed.
This is a breaking news story. Please check back for updates.
Share this on Facebook
Tweet
Psaki Again Blames Republicans for Crime Wave While Defending ATF Nominee Chipman
Spencer Brown