Biden Says He Would Consider Kamala Harris for Vice President 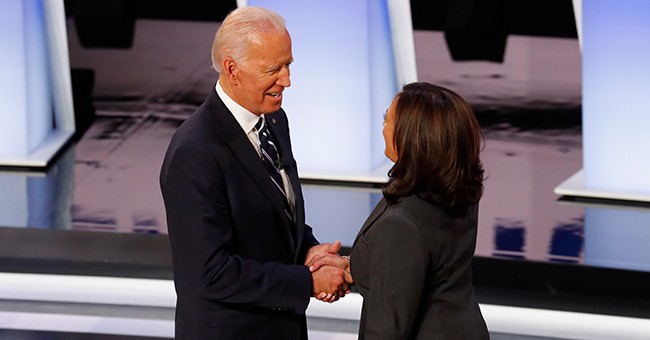 While on his gaffe tour through Iowa, Democratic presidential candidate Joe Biden was asked by a reporter if he would choose Sen. Kamala Harris (D-CA) to be his running mate.

Joe Biden was already boarding his bus and appeared to have finished taking questions when the candidate snapped back around to answer whether or not he would consider Harris for vice president.

"Of course I would," the candidate answered. "Look, Senator Harris has the capacity to be anything she wants to be. I mean it, sincerely. I talked to her yesterday. She is -- and she is solid."

High praise for Kamala Harris, a woman who Biden seemingly forgot existed at the last Democratic presidential debate. Harris officially ended her bid for the presidency on Tuesday, but it unofficially ended when Rep. Tulsi Gabbard attacked Harris' record as a prosecutor on the debate stage in August.

"She could be president someday herself," Biden continued. "She can be vice president. She can go on to become a Supreme Court justice. She could be attorney general. She has enormous capability." Biden's staff was relieved that the candidate did not say Kamala Harris could be senator someday.

"Are there any hard feelings from the debate when she criticized you?" a reporter followed up.

"I'm not good at keeping hard feelings," Biden responded. But try telling that to the prosecutor he got fired for looking into his son's employer.

Joe Biden is currently in the middle of an 18-county bus tour through the Hawkeye State. The tour was designed to improve Biden's lagging poll numbers in the state, but the candidate's signature gaffes and creepiness have joined Biden along for the ride. At the very first stop, the candidate began nibbling on his wife's finger as she spoke to the crowd. The incident must have jogged someone's memory of another creepy incident two years ago where the candidate talked about his hairy legs when he was a lifeguard at a public pool. In the video that went viral over the weekend, the candidate recalls the time he "learned about roaches" and how much he enjoyed having kids on his lap.

Um, it might be a good idea to have a tough-on-crime prosecutor like Harris keeping eyes on this creepy Uncle Joe guy.