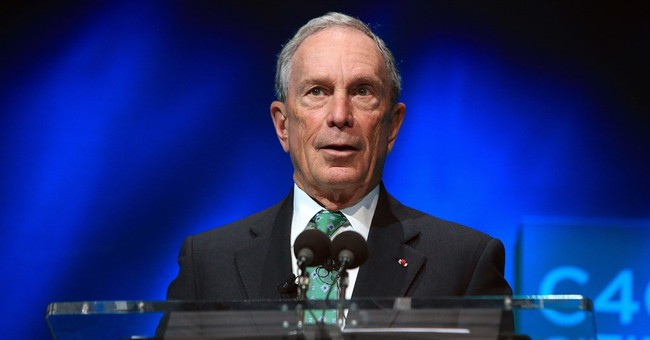 Michael Bloomberg has yet to officially announce his entry into the 2020 presidential race, but the former New York City mayor is already pursuing plans to register voters in five battleground states in an effort to undermine President Trump's bid for reelection, the Associated Press is reporting.

Bloomberg plans to spend $15 million to $20 million on the voter registration drive, on top of the $100 million the billionaire also plans to spend on online campaign ads attacking President Trump in four key states.

(Via the Associated Press)

The new effort will target 500,000 voters from traditionally underrepresented groups that typically lean Democratic, including African Americans, Latinos, Asians, young voters and those living in some rural communities. The drive will begin early next year in Arizona, Michigan, North Carolina, Texas and Wisconsin, but could expand to more states. ...

The new voter registration drive targets voters across five states that Trump won in 2016 largely by narrow margins. The Republican president carried Michigan and Wisconsin by less than 1 point and Arizona and North Carolina by 3 points. The exception is Texas, where Trump scored a 9-point victory, but where Democrats are increasingly hopeful that demographic shifts backed by California transplants will make the state more competitive next year.

Madison, Wisconsin, Mayor Satya Rhodes-Conway, who is part of a training program for mayors across the country funded by Bloomberg, said the new investment would make a significant difference on the ground in her state, where Trump won by fewer than 23,000 votes.

Bloomberg had previously decided not to run for president, but reportedly reconsidered his decision earlier this month in light of former Vice President Joe Biden's struggles in the polls and Bloomberg's dissatisfaction with the current crop of Democratic candidates.

Like Tom Steyer, Bloomberg's strategy is to essentially buy his way into the Oval Office. With such slim margins in a handful of swing states, it's no wonder the Democrats are considering giving felons in prison the right to vote.