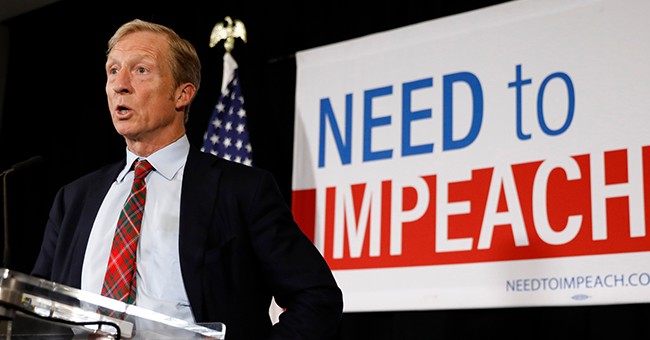 The AP said the Steyer campaign's attempts to purchase endorsements did not violate any campaign finance laws, so long as the expenses were properly disclosed to the Federal Election Commission. But the campaign's strategy of buying the billionaire's way into the White House isn't really a good look for the campaign.

Apparently it's not illegal for Tom Steyer to "buy" endorsements, but it sure looks shady,dirty,wrong from where I'm sitting. ????? https://t.co/PtNOyD3xGo

tom steyer paid his way onto the debate stage. he spent millions or dollars on ads that pop up on youtube with no substance other than “orange man bad”. he has no grassroots support. get money out of politics. https://t.co/NTTSuNrb3f

Gov. Steve Bullock (D-MT) said in a statement that "Tom Steyer's campaign is built on writing the biggest checks, not on building genuine grassroots support -- and proves why it's so important to get Big Money out of our elections."

.@GovernorBullock issues a statement on the Pat Murphy story. “First he buys his way onto the debate stage and now Tom Steyer’s trying to buy endorsements,” Bullock said in a statement. pic.twitter.com/T5JM3Az1gY

Steyer and the Democratic Party also drew criticism from many others on both sides of the political aisle.

It’s really wild to see the Democratic Party say they’re about stopping the influence of Money in Politics while they let billionaire Tom Steyer buy his way into debates and endorsements. https://t.co/EB11zDpA0H