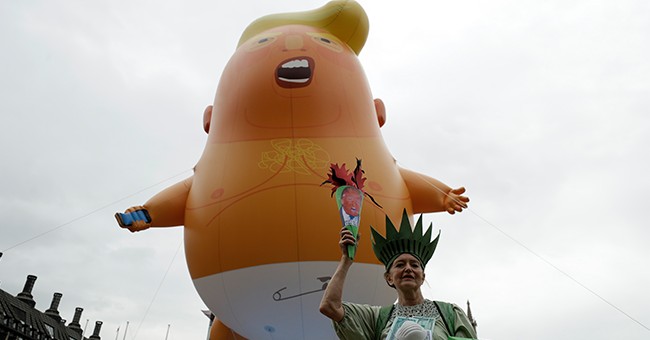 The baby Trump balloon has become a symbol for the left ever since a bunch of whiny Brits, who can't figure out how to leave the European Union, protested Trump's visit there back in June. One brave woman, who should probably be put in charge of overseeing Brexit, singlehandedly brought the balloon down. She was shortly apprehended by police for killing the balloon. But the brave woman definitely deserved a medal for her actions and quick thinking, as Matt Vespa wrote at the time.

Well, in today's football matchup between the University of Alabama and Louisiana State University, attended by President Trump and First Lady Melania, some unoriginal leftists thought it'd be a good idea to fly baby Trump again. Didn't they see what happened the last time? Alabama is full of patriotic, Trump-loving, red-blooded Americans who won't stand idly by as an insulting import from Britain makes a mockery of their Make America Great Again president.

if you're feeling generous, there's a link to donate to Hoyt's bail fund for stabbing baby Trump balloon. ?? https://t.co/sN01OrIDP0

Hutchinson posted a Facebook video saying he would "do it again if given the opportunity" and asked for help because, as he said, "I'm gonna have to pay for the balloon."

"Some liberals tried to come to my home town and start some trouble. Well, that ain't happening. I did get arrested, and I got charged. But that's alright. I'd do it again if given the opportunity. But, I'm glad all y'all enjoyed that -- better than this game right here. But I am going to need some help, so go to one of the GoFundMe pages. I'm gonna have to pay for the balloon. Just give what you can. If it gets over what it costs, I'm donating the rest to the Republican party. Y'all have a great day. Trump 2020."

In case you have any doubt about whether the Baby Trump murderer, Hoyt Hutchinson, is a Trump supporter ... roll tape #LSUvsBAMA pic.twitter.com/ftJrTLe9Vk

If it didn't fly in Europe, it definitely won't fly in Trump country.

Townhall.com Staff
This Is How Much the Biden Admin Is Spending to Not Finish the Wall at the Border
Julio Rosas