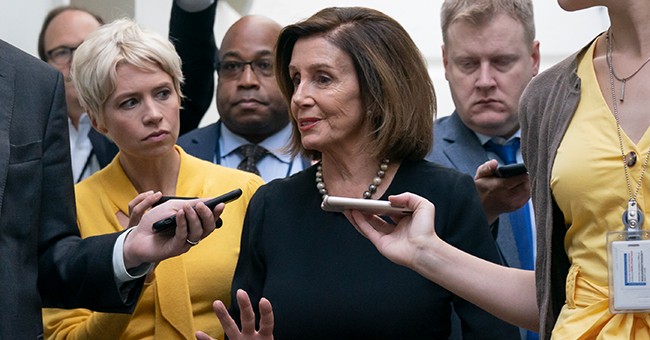 House Speaker Nancy Pelosi made some interesting comments about impeachment on Saturday. Rep. Pelosi spoke to a group of Democrats at Drake University in Iowa.

At first, Pelosi says she didn't think President Trump was worthy of impeachment, "because it further divides the country." So what happened? Pelosi explains, "I always said, when we get more facts, we will be ready, and we are ready, and the courts are now supporting everything. You probably saw yesterday -- we had a big court, another big court decision."

The court decision the speaker was referring to was a Friday ruling by an Obama appointed Judge approving a request by House Democrats for access to secret grand-jury material related to Special Counsel Robert Mueller's investigation. So it actually sounds like the Democrats don't have any new facts, but they are hoping to find some that will help justify their impeachment.

"Nobody comes to Congress to impeach a president," Pelosi assured the crowd. But Rep. Rashida Tlaib says that's why her and her fellow Democrats are there. In a speech back in January, Tlaib said the Democrats are "gonna go in there and we're gonna impeach the mother******." So Pelosi is lying about that, too.

Pelosi then said, because impeachment will further divide the country, the Democrats plan to "move forward with this, we want to do it in the most solemn, prayerful way that has a healing effect on our country, and to do so in a way that we are worthy of the oath of office that we take.”

If she and the Democrats are worried about needlessly dividing the country and moving forward with impeachment in a "solemn, prayerful way that has a healing effect" on the country, then why doesn't she and her fellow Democrats hold a vote to open an official impeachment inquiry that allows Republicans in Congress to access and subpoena witnesses?