Cardinal Dolan Fires Back at NY Gov. Cuomo After He Criticizes the Church on Abortion 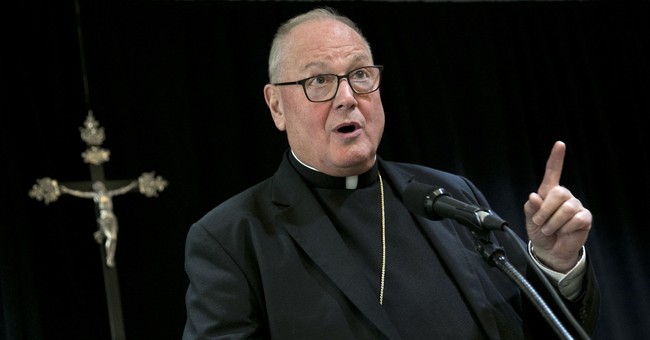 Cardinal Timothy Dolan is fighting back after New York Governor Andrew Cuomo accused him in the New York Times of being aligned with the “religious right” when it comes to abortion.

Governor Cuomo has been roundly criticized by Republicans since his signing of a late-term abortion bill into law on January 17, and ordering that the World Trade Center be lit pink in celebration. Many Catholics have also called for his excommunication, as Cuomo identifies as Catholic.

“Mr. Trump and the religious right are spreading falsehoods about New York’s law to inflame their base,” wrote Cuomo. “Activists on the far right continue to mislead with the ridiculous claim that the act will allow abortions up to a minute before birth. While Cardinal Timothy Dolan, the archbishop of New York, and the Catholic Church are anti-choice, most Americans, including most Catholics, are pro-choice. The 73 percent of New Yorkers who support Roe includes 59 percent of Catholics. While governments may very well enact laws that areconsistent with religious teaching, governments do not pass laws to beconsistent with what any particular religion dictates.”

“I was educated in religious schools,” the governor added, “and I am a former altar boy. My Roman Catholic values are my personal values. The decisions I choose to make in my life, or in counseling my daughters, are based on my personal moral and religious beliefs.”

On Thursday, Dolan issued a statement in response to the governor.

“Debate abortion on what it is,” wrote the cardinal. “Don’t hide behind labels like ‘right wing’ and ‘Catholic.”

Dolan also defended himself and his track record on working with Governor Cuomo.

“This is something new from the governor,” Dolan wrote. “He did not consider me part of the “religious right” when seeking my help with the minimum wage increase, prison reform, protection of migrant workers, a welcome of immigrants and refugees, and advocacy for college programs for the state’s inmate population, which we were happy to partner with him on, because they were our causes too. I guess I was part of the “religious left” in those cases.”

When it came to the issue of abortion itself, Dolan clarified that it is not a right versus left or Catholic issue, but a humanitarian one.

“The civil rights of the helpless, innocent, baby in the womb, as liberal Democrat Pennsylvania Governor Robert Casey once remarked is not about ‘right versus left’, but right versus wrong,” the cardinal wrote.

“The governor also continues his attempt to reduce the advocacy for the human rights of the pre-born infant to a “Catholic issue,” an insult to our allies of so many religions, or none at all. Governor Casey again: ‘I didn’t get my pro-life belief from my religion class in a Catholic school, but from my biology and U.S. Constitution classes.’”