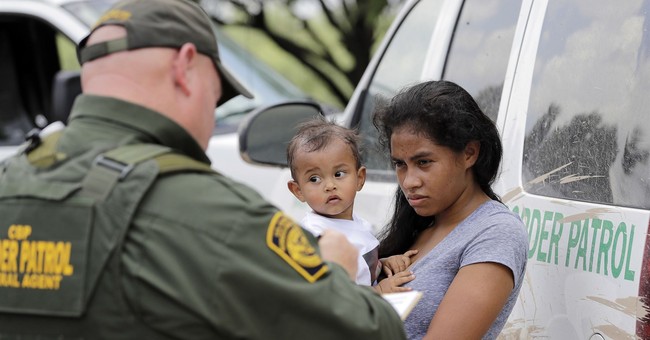 Rolling back President Donald Trump's tougher immigration policies was one of President Joe Biden's main goals once his administration officially started. Talks of providing amnesty to millions of illegal aliens during the first 100 days in office and rescinding the "Remain in Mexico" policy – where those applying for asylum remain in Mexican until a judge determines their fate – prompted Central American caravans to start up once again.

But two Congressional Democrats in Texas are warning Biden about the backlash these decisions will have. They are concerned that the Democratic Party's "messaging and policy proposals are too much, too soon," POLITICO reported.

Reps. Henry Cuellar and Vincente Gonzalez represent districts along the United States-Mexico border. Their concerns are simple: they are concerned about America's health care system being overrun because of the number of illegal aliens who decide to flock to the United States while the COVID pandemic rages on.

“The way we’re doing it right now is catastrophic and is a recipe for disaster in the middle of a pandemic,” Gonzalez told POLITICO.

So far the congressmen's concerns are becoming reality. The number of illegal aliens flocking to the southern border continues to rise. As of now, the number of illegal aliens crossing the border is almost to the same level as it was before the Wuhan coronavirus pandemic began, the Wall Street Journal reported. The last time local officials in border towns saw a large number of deportations in border towns was in 2019 when the Central American caravans flocked to the United States. Many of those claimed to be seeking asylum.

Cuellar warned about the dangers of rolling back Trump's policies before the election in November. But his words fell on deaf ears.

“I said, ‘Hey, we don’t want the wall, but when it comes to the other issues, we gotta be careful that we don't give the impression that we have open borders because otherwise the numbers are going to start going up. And surely enough, we’re starting to see numbers go up,” Cuellar said.

Their concerns go far beyond just the current pandemic. The three congressmen believe this policy decision could be detrimental for the Democratic Party as a whole.

“Our party should be concerned. If we go off the rails, it’s going to be bad for us. Biden is going to be dealing with a minority in Congress if he continues down some of these paths," Gonzalez explained.

Cuellar's district was once a solid blue district, one Democrats took for granted. But in 2020 something happened: Latinos in the area voted for Trump. It's because people in the district woke up and realized their strong Christian values, including being pro-gun, pro-gun and anti-abortion, aligned more with the Republican Party than the Democrats. Trump's strong economic policies and the pre-COVID booming economy was the icing on the cake.

Moving further left is great for the progressive wing of the Democratic Party but it alienates those who are more moderate, like those in Cuellar's district.

“A lot of the Democratic-leaning groups still have not figured out how to talk to Latinos in that the overwhelmingly progressive messaging is not that effective,” Gonzalez told POLITICO. “So, yes, immigration is important, but the focus for them is on jobs, the economy, the raise I got at work, the cost of health care and if I can take a loan out for my business.”

Democrats have continually taken Latinos and Hispanics for granted. The Democratic Party treats that demographic differently, as though the only issue they could possibly care about is immigration. But the truth is, they're just like every other American. They care about jobs and the economy. They care about whether or not they can put food on the table or keep a roof over their head. They're not single-issue voters.