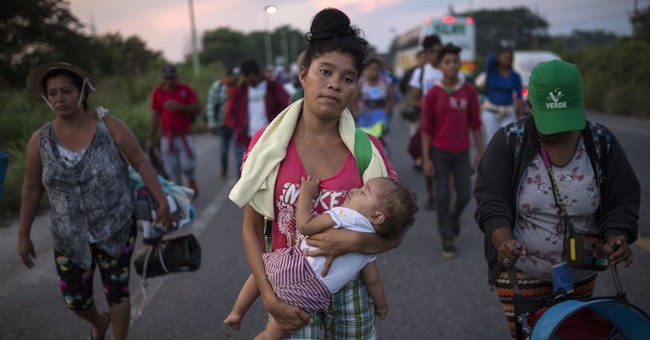 President-elect Joe Biden (D) has a number of executive actions in the works. He plans to sign roughly a dozen executive orders throughout his first 10 days in office. The first one he plans to sign into law on Wednesday after he is sworn in is focused on propping up illegal aliens.

According to CBS News, Biden's immigration overhaul includes providing a pathway to citizenship for illegal aliens, imposing a deportation moratorium and extending protection for Dreamers.

It's no wonder why a caravan from Central America is already headed to the United States-Mexico border. In fact, an illegal alien from Honduras admitted that the reason the caravan is coming to America is because they know a Biden administration would be more sympathetic to them.

"I'm here today because in my country, the hurricane we had, is kind of terrible and we got a president that's not helping the population and being in a bad situation. I'm coming from way, way far [away]," he explained, pointing behind him. "My family, I left them home. I know they're kind of rowdy because I don't have no internet so that they can check me and see how I'm doing."

"I'm here today because I'm coming to get to the U.S.," he said matter-of-factly.

According to the Honduran, the pandemic has had a detrimental impact on his home country. He said he used to work as a tour guide for those who visited his island. Since the start of the Wuhan coronavirus, tourists are nonexistent.

"What I want for my people, I just want patience and pass to the U.S. because they have a new president," he explained. "President Biden is going to help all of us. He's giving us 100 days to get to the U.S. and give us a paper so we can get a better life for our kids and our family."

Honduran migrant: President-elect Biden is "going to help all of us." pic.twitter.com/LkrVCsXcSb

Conservatives have repeatedly said that if a Democrat were to win the White House, the caravans would flock to the southern border yet again. It's because illegal aliens know that the Democrats are sympathetic to them and their cause. They know that they will not be deported and will receive various types of welfare benefits. All they have to do is get to America. Once they cross the border, the Democratic Party will take care of things the rest of the way.

President Trump was the first president to truly implement immigration policies that had America's best interest in mind. Sealing off the southern border and building a border wall sent a message to illegal aliens and the drug cartels: no more.

With the stroke of a pen, Biden will undo years of work simply because it makes him feel good. And, once again, the illegal immigration crisis will spiral out of control.