McCarthy: I Have Some Real 'Concerns' About Cheney's Impeachment Vote 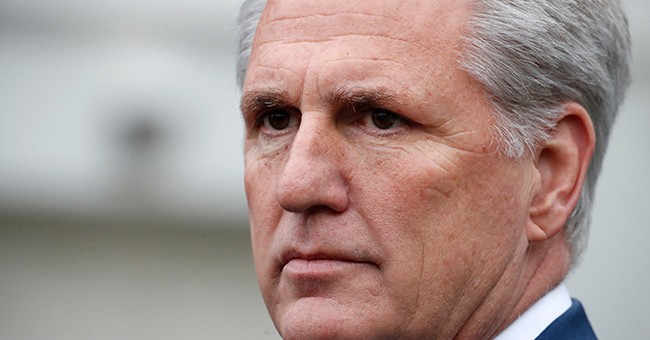 Even since Republican Conference Chair Liz Cheney (WY) decided to vote alongside Democrats to impeach President Donald Trump, the caucus has been divided on the issue. There are even more questions, predominantly legal ones, about whether or not a former president can be impeached.

Despite the legal concerns and questions, House Minority Leader Kevin McCarthy (R-CA) said he support's Cheney in her decision but he also has "concerns" about how she ignored normal leadership processes to go about it.

"Look, I support her, but I also have concerns," he told Gray TV's Greta Van Susteren, according to a transcript of an interview that will air Sunday. "She took a position as a number three member in conference, she never told me ahead of time. One thing about leadership, if we're going to work together, we should understand. We know that this is going to become a difficulty. She can have a difference of opinion, but the one thing if we're going to lead within the conference, we should work together on that as a whole conference because we're representative of that conference. So I support her, but I do think she has a lot of questions she has to answer to the conference."

McCarthy has repeatedly said he supports Cheney staying in her role. Various members of the conference, however, have called for removal, including Rep. Jim Jordan (OH) and Freedom Caucus Chairman Andy Biggs (AZ).

The GOP Leader said Cheney has to answer members' questions so the party can move forward on a unified front, something he is focused on. Being on the same page means the Republican Party has a chance to flip the House during the midterm elections.

"Look, everybody's able to vote their district or what they think is most important. Leadership is a little different job, especially when you're the communications arm of it and the number three person. I think it's best that within the Republican Party, that we have a lot of different voices," he said. "I think there's a lot of questions that have to be answered and we've got to be able to do that in a family meeting to help bring people back together."

Cheney's vote to impeach President Trump has resulted in a primary challenger. The Wyoming Republican Party also voted to censure her. The GOP Conference Chair, however, said she's not going anywhere.