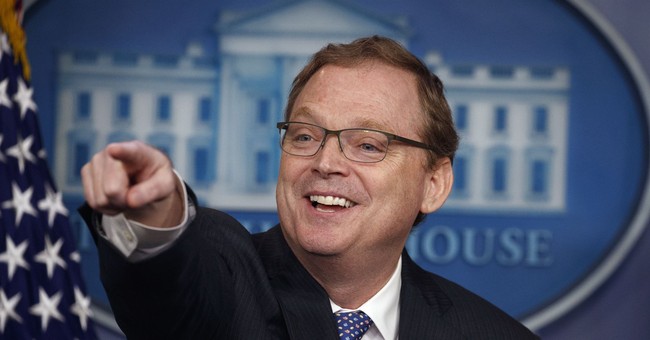 The Wuhan coronavirus has left millions of Americans furloughed, laid off and relying on unemployment and food stamps to make it through this pandemic. Although things look bleak right now, White House Senior Economic Adviser Steve Hassett said good things are on the horizon.

"I think that what we're going to see is more bad data because the data tends to be in the rearview mirror, but if you look at things like employment, small businesses or the percentage of businesses that are open or even the credit card data which we get a peek at, then you can see things pretty much inflected in early May," Hassett told CNN's Dana Bash on Sunday. "And so, my expectation is since there's still initial claims for unemployment insurance in May that the unemployment rate will be higher in June than in May but then after that it should start to trend down."

While we're not there yet, Hassett believes the U.S. is close to an "inflection point," at least on the economic front, of the Wuhan coronavirus pandemic.

He warned that unemployment numbers will be higher, especially for the months of May and June, but things are expected to rebound.

"It's going to be quite a bit higher. There were some technical things they kinda messed up. In an economic lecture we'd go into them. But it could be, if they fix them, fix the numbers and fix the things that they mischaracterized last time, that you'll end up with a number north of 20 percent in May," Hassett said.

Although that number is high, businesses are opening up across the country. One of the challenges will be consumer confidence. The number of cases the U.S. has over the summer will dictate whether or not Americans decide to go shopping and visit restaurants.

"If you look at the Congressional Budget Office outlook for GDP, which I think is about what we should expect, they've got about the worst ever quarter in the second quarter in U.S. history, or the worst quarter ever in U.S. history, but then the best in the third quarter," he explained. "So, what's going to happen, in all likelihood, is that you're going to see the second-quarter drop a lot and the third quarter skyrocket. And then the question is when you skyrocket do you get back to where you were when you started and the CBO doesn't quite think so."

The month of May could see an unemployment rate north of 20%, according to Kevin Hassett, senior economic adviser to President Trump.
He adds that he expects “the unemployment rate will be higher in June than in May, but then after that it should start to trend down.” #CNNSOTU pic.twitter.com/KoAMyXRLef