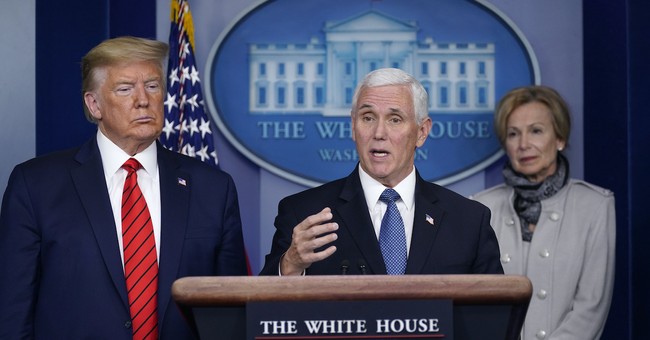 Vice President Mike Pence and his wife, Second Lady Karen Pence, will be tested for the Wuhan coronavirus after a member of his staff tested positive for the virus on Friday. The staffer developed mild cold-like symptoms a day-and-a-half before he was tested.

Pence made the announcement on Saturday during the White House's Coronavirus Task Force press conference.

According to the vice president, the staff member hasn't been to the White House since Monday. The White House completed contact tracing and determined that neither Vice President Pence or President Donald Trump had immediate contact with the individual.

Even though the Pences are asymptomatic, the vice president said they will take a test because of his position.

"Given the unique position that I have as vice president and as the leader of the White House coronavirus task force, both I and my wife will be tested for the coronavirus later this afternoon," Pence said during Saturday's press conference.

President Donald Trump was already tested for the Wuhan coronavirus, despite having no symptoms. His results came back negative.

“I decided I should based on the press conference yesterday. People were asking, ‘Did I take the test?’” Trump said at the time. “The press has been going crazy.”

During Saturday's press conference, Dr. Anthony Fauci, the Director of the National Institute of Allergy and Infectious Diseases, stressed the importance of Americans who are asymptomatic to refrain from being tested for the virus. Being tested without having any symptoms can put health care workers at risk.