'Baby Trump' Balloon Is Back and This Time With Security 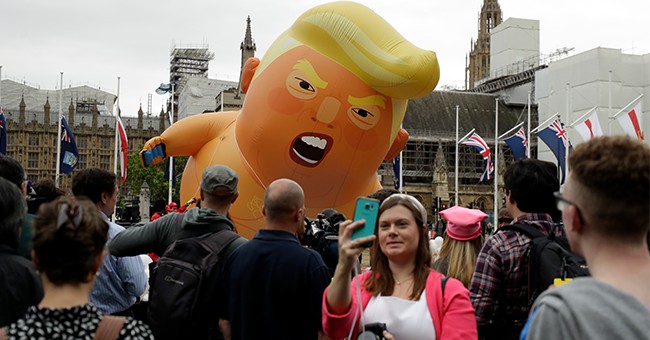 The "Baby Trump" balloon is back in action after being slashed during a football game between the University of Alabama and Louisiana State University earlier this month.

The man responsible for the slashing, Hoyt Hutchinson, said he would do it all over again if he was given a chance because "some liberals tried to come to my home town and start some trouble."

The infamous balloon made an appearance during President Donald Trump's rally in Sunrise, Florida earlier this week, the Miami Herald reported. Supporters, however, were determined to make sure the balloon remained fully intact this time.

A police detail carefully monitored the balloon and a group of volunteers "who are specially trained to deescalate crowds who may get boisterous" was tasked with protecting it.

“Baby Trump has gotten viciously attacked, and that’s just not respectful,” Rochelle Lessner, a retired attorney from Hollywood and designated volunteer bodyguard for the balloon, told the Herald. “I donated $50 to bring him here.”

Lessner was one of the hundreds of people who donated to the GoFundMe to make the event a reality. Although the fundraising goal was $3,700, the group raised more than $4,100.

What's hilarious is how serious progressives take this balloon and keeping it from being popped at all costs.

At Tuesday’s protest, Florida Democratic Party staffer Chris Hill brought volunteers together like the leader of a military brigade to go over their assignments.

“We need you to be the Secret Service for Baby Trump,” he told the group of volunteers, who including a retired attorney, a group of teen girls wearing impeachment T-shirts and a woman dressed as the Statue of Liberty in a green dress.. “If things start to escalate, don’t make eye contact. If people ‘bro pump’ with their chest, don’t engage on that level.”

According to an event description, the goal of having the balloon at the rally was to make sure President Trump knew that although he changed his residency from New York to Mar-a-Lago, Democrats "WILL defeat him in 2020!"

"He is not the first person to move to Florida to retire," Florida Democratic Party Chair Terrie Rizzo said in a statement.

Naturally, Democrats had to applaud themselves for the move.

Baby Trump here, checking in to let you know that although I’m in the air, the energy on the ground here in the Florida is unmatched and in 2020 we’ll #DefeatTrumpFL #flapol pic.twitter.com/c3E72tis9D

The man who was responsible for knifing Baby Trump earlier this month, Hoyt Hutchinson, was arrested and charged with felony first-degree criminal mischief, The Hill reported.

For the Trump rally in Florida, Baby Trump arrived at the BB&T Center a few hours before the president. The balloon has made its way to various events and rallies throughout the state of Florida since last September.

Every time Baby Trump is inflated for an event, anti-Trumpers spend $1,000 on helium.

The Baby Trump balloon became a thing during the summer of 2018 when Brits decided to protest President Trump's visit to their country. The Mayor of London, Sadiq Khan, gave a group of leftist protestors the green light to fly the balloon, although he wasn't initially onboard with the idea. Since then, progressives have floated the balloon across the pond, in various parts of the United States.