Warren Acknowledges Medicare For All Will Displace Health Insurance Workers. Her 'Solution' Is Ridiculous. 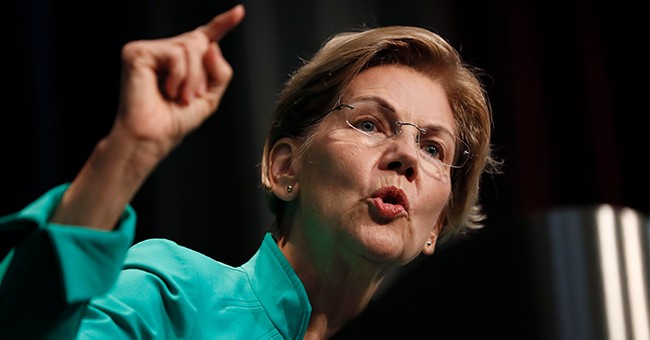 Sen. Elizabeth Warren (D-MA) believes she has the answer to everything, at least on the health care front. Obamacare made health care skyrocket, so she wants to replace it with Medicare For All, a plan that has a $52 trillion price tag over the next 10 years. Her way of paying for the plan: premiums that would normally be paid to private health insurance would instead be funneled to Medicare.

But what about the jobs associated with those who work in the health care industry? Don't worry! Warren believe she has a plan for that too!

"So, if you've had a chance to read the plan, no one gets left behind," Warren said when confronted with the question in Iowa. "Some of the people currently working in health insurance will work in other parts of insurance – in life insurance, in auto insurance, in car insurance. Some will work for Medicaid."

The Massachusetts Senator said she built in a five year "transition support" for those who lose their jobs as a result of the Medicare For All plan's implementation.

"What this is about is how we strengthen America's middle class and how we make sure, in transitions, no one gets left behind," she explained. "It's right there in the plan and it's fully paid for."

Elizabeth Warren is delusional. What makes her think that hundreds of thousands of people are going to suddenly transition from working in medical insurance to auto or car insurance? Those are very vastly different industries entirely. Just because the word "insurance" is in the job title doesn't mean that those skills are 100 percent transferable. Insuring someone based on pre-existing conditions, medications and necessary medical treatment isn't the same as insuring someone's car.

Recommended
The President Promises 'As a Biden' He Won't Raise Taxes, But What's Biden's Word Worth?
Spencer Brown

Q: Where do those who work in health insurance go when private insurance is eliminated?

Sen. Warren: "No one gets left behind. Some of the people currently working in health insurance will work in other parts of insurance. In life insurance, in auto insurance, in car insurance." pic.twitter.com/5jztvYbqnb

Reagan McCarthy
The President Promises 'As a Biden' He Won't Raise Taxes, But What's Biden's Word Worth?
Spencer Brown
MSNBC Host Complains Americans Are 'Obsessed with the Southern Border and Criminality’