Report: DHS Agents Are Being Sent To The Guatemela-Mexico Border 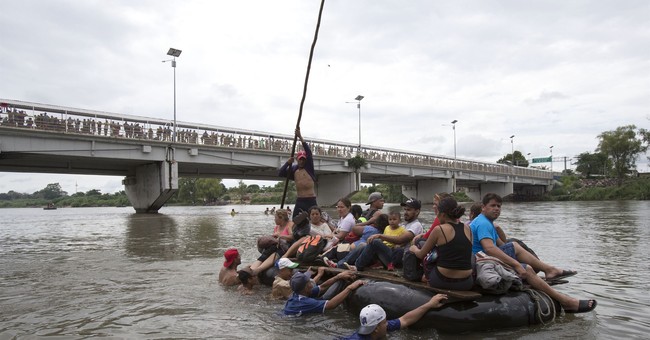 As the Trump administration attempts to deal with the crisis at the border, the Trump administration is reportedly taking a different approach. They're sending Homeland Security agents and investigators to the Guatemala-Mexico border to advise Guatemala’s national police and migration authorities, the Washington Post said. The goal is to keep these people from flocking to the United States' border.

"Plans call for at least several dozen DHS agents and investigators, and one DHS official briefed on the plans said about 80 U.S. law enforcement personnel will deploy as part of the mission," WaPo reported. "Another DHS official said Immigration and Customs Enforcement will send 18 Homeland Security Investigations agents and intelligence analysts, along with six agents from the Enforcement and Removal Operations division."

The unofficial announcement comes after DHS and the Guatemalan government signed an agreement on Tuesday. The two countries will work together to combat human smuggling and trafficking; drug trafficking; illegal trade and financial flows in the Northern Triangle of Central America – Guatemala, Honduras. and El Salvador.

“I am proud to sign this agreement with Minister Enrique Antonio Degenhart,” Acting Secretary Kevin McAleenan said in a statement at the time. “Through our continued collaboration and partnership, the U.S. and Guatemala are formalizing a number of initiatives to improve the lives and security of our respective citizens by combating human trafficking and the smuggling of illegal goods, helping to limit ‘push’ factors that encourage dangerous irregular migration to the U.S., perpetuating the ongoing crisis at or border.”

The plan is set to last for two years, CNN reported.