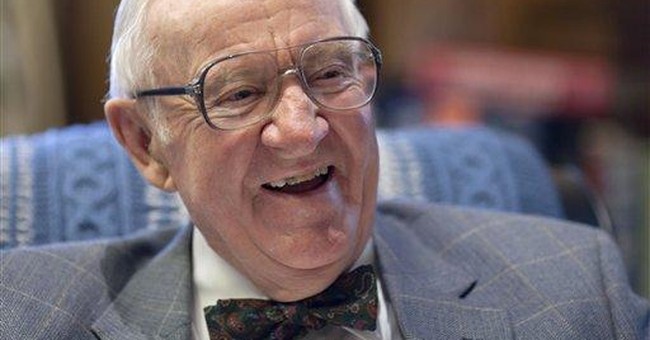 In his new memoir, “The Making of a Justice,” former Supreme Court Justice John Paul Stevens reveals what case he believes was the Court's "worst decision" during his tenure.

"District of Columbia v. Heller, which recognized an individual right to possess a firearm under the Constitution, is unquestionably the most clearly incorrect decision that the Supreme Court announced during my tenure on the bench," Stevens wrote.

The Heller decision is one of the biggest Second Amendment victories gun owners have seen. The 5-4 decision recognized an individual's right to possess a firearm unconnected from service in a militia for purposes such as self-defense within the home. Heller set the landscape for the McDonald decision, which upheld a person's right to keep and bear arms for self-defense. It prohibited states from denying life, liberty, or property without due process of law.

Stevens essentially argues that the Heller decision made it almost impossible for gun control advocates to place limitations on a person's Second Amendment rights.

Here's an excerpt (emphasis mine):

Until Heller, the invalidity of Second Amendment–based objections to firearms regulations had been uncontroversial. The first two federal laws directly restricting the civilian use and possession of firearms—the 1927 act prohibiting mail delivery of handguns and the 1934 act prohibiting the possession of sawed-off shotguns and machine guns—were enacted over minor Second Amendment objections that were dismissed by the vast majority of legislators participating in the debates. After reviewing many of the same sources that are discussed at greater length by Scalia in his majority opinion in Heller, the Miller Court unanimously concluded that the Second Amendment did not apply to the possession of a firearm that did not have “some relationship to the preservation or efficiency of a well regulated militia.” And in 1980, in a footnote to an opinion upholding a conviction for receipt of a firearm, the Court effectively affirmed Miller, writing: “[T]he Second Amendment guarantees no right to keep and bear a firearm that does not have ‘some reasonable relationship to the preservation or efficiency of a well regulated militia.’”

So well settled was the issue that, speaking on the PBS NewsHour in 1991, the retired Chief Justice Warren Burger described the National Rifle Association’s lobbying in support of an expansive interpretation of the Second Amendment in these terms: “One of the greatest pieces of fraud, I repeat the word fraud, on the American public by special-interest groups that I have ever seen in my lifetime.”

Even if the lobbyists who oppose gun-control regulation actually do endorse the dubious proposition that the Second Amendment was intended to limit the federal power to regulate the civilian use of handguns—that Burger incorrectly accused them of “fraud”—I find it incredible that policy makers in a democratic society have failed to impose more effective regulations on the ownership and use of firearms than they have.

And even if there were some merit to the legal arguments advanced in the Heller case, all could foresee the negative consequences of the decision, which should have provided my colleagues with the justification needed to apply stare decisis to Miller. At a minimum, it should have given them greater pause before announcing such a radical change in the law that would greatly tie the hands of state and national lawmakers endeavoring to find solutions to the gun problem in America. Their twin failure—first, the misreading of the intended meaning of the Second Amendment, and second, the failure to respect settled precedent—represents the worst self-inflicted wound in the Court’s history.

It also represents my greatest disappointment as a member of the Court. After the oral argument and despite the narrow vote at our conference about the case, I continued to think it possible to persuade either Justice Anthony Kennedy or Justice Clarence Thomas to change his vote. During the drafting process, I had frequent conversations with Kennedy, as well as occasional discussions with Thomas, about historical issues, because I thought each of them had an open mind about the case. In those discussions—particularly those with Kennedy—I now realize that I failed to emphasize sufficiently the human aspects of the issue as providing unanswerable support for the stare decisis argument for affirmance. After all, Kennedy had been one of the three decisive votes that had saved Roe v. Wade from being overruled in Planned Parenthood v. Casey.

When he wrote the dissenting opinion for Heller, Stevens circulated it around the Court before Justice Scalia shared his majority opinion. The reason? He thought he could bring up points the other Justices had not considered.

This was his cover memo (emphasis mine):

The enclosed memorandum explains the basis for my firm belief that the Second Amendment does not impose any limit whatsoever on the power of the federal government to regulate the non-military use or possession of firearms. I have decided to take the unusual step of circulating the initial draft of a probable dissent before [Scalia] circulates his majority because I fear the members of the majority have not yet adequately considered the unusual importance of their decision.

While I think a fair reading of history provides overwhelming support for Warren Burger’s view of the merits, even if we assume that the present majority is correct, I submit that they have not given adequate consideration to the certain impact of their proposed decision on this Court’s role in preserving the rule of law. We have profound differences over our role in areas of the law such as the Eighth Amendment and substantive due process, but I believe we all agree that there are areas of policy-making in which judges have a special obligation to let the democratic process run the show …

What has happened that could possibly justify such a massive change in the law? The text of the amendment has not changed. The history leading up to the adoption of the amendment has not changed … There has been a change in the views of some law professors, but I assume there are also some professors out there who think Congress does not have the authority to authorize a national bank, or to regulate small firms engaged in the production of goods for sale in other states, or to enact a graduated income tax. In my judgment, none of the arguments advanced by respondents or their numerous amici justify judicial entry into a quintessential area of policy-making in which there is no special need or justification for judicial supervision.

This is not a case in which either side of the policy debate can be characterized as an “insular minority” in need of special protection from the judiciary. On the contrary, there is a special risk that the action of the judiciary will be perceived as the product of policy arguments advanced by an unusually powerful political force. Because there is still time to avoid a serious and totally unnecessary self-inflicted wound, I urge each of the members of the majority to give careful consideration to the impact of this decision on the future of this institution when weighing the strength of the arguments I have set forth in what I hope will not be a dissent.

Stevens also believes a Constitutional amendment should be added to overturn Heller in order to overturn tragedies, like school shootings.

What's dangerous about what Justice Stevens is saying: he's advocating for an activist Court. He's wanting the Court to determine what's constitutional based on how justices feel about a particular issue.

Justices have a duty to uphold the Constitution, even if he or she doesn't agree with the protections the Founding Fathers laid out for us. If they want to have the power to decide what kind of legislation our country needs then they should be members of Congress, not members of America's highest court disguised as "impartial."

Larry Keane, Senior Vice President of Government and Public Affairs and General Counsel for the National Shooting Sports Foundation said it best: Stevens is a gun control advocate who has a disdain for the Second Amendment.

"In 2012, Justice Stevens told a Brady Center to Prevent Gun Violence audience it was 'mind-boggling' Congress hadn’t taken steps to address what he called gun violence. Justice Stevens was conveniently ignoring the gun-control pep rally crowd was that even during his tenure on the bench, gun ownership has grown in popularity, even as crime plummeted," Keane wrote in an opinion piece.

"He’s also conflating lawful gun ownership with criminal actions of, well, criminals. Justice Stevens isn’t calling for a ban on freedom of speech because of hateful rhetoric, or a ban on freedom of religion because we’ve witnessed horrific acts committed in a religion’s name. He’s got no problem, however, with attempting to eradicate the right to keep and bear arms. In fact, he’s never hidden his disdain for the Heller decision, or the Second Amendment altogether," Keane said.