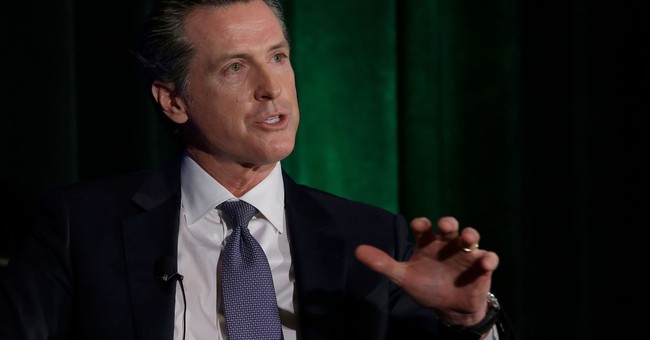 California Gov. Gavin Newsom (D) has been a star in the Democratic Party. His great hair, gorgeous smile and progressive promises have made him a governor Democrats love to tout. After all, he has become one of the leading voices of opposing President Donald Trump's immigration policies, an outspoken supporter of gun control measures and a fearless advocate for making climate change a policy priority. He sounds like the Democrats' dream, doesn't he? He may have put a nail in that coffin with his decision to sign an executive order on Wednesday that would put a halt to the death penalty while he's governor.

Newsom's reason for the executive order? He believes capital punishment is discriminatory, unjust and “inconsistent with our bedrock values.”

“I do not believe that a civilized society can claim to be a leader in the world as long as its government continues to sanction the premeditated and discriminatory execution of its people,” Newsom said in a statement expected to be delivered on Wednesday. “In short, the death penalty is inconsistent with our bedrock values and strikes at the very heart of what it means to be a Californian.”

“Our death penalty system has been — by any measure — a failure,” Newsom explained.

“It has discriminated against defendants who are mentally ill, black and brown, or can’t afford expensive legal representation. It has provided no public safety benefit or value as a deterrent. It has wasted billions of taxpayer dollars.”

According to the California Department of Corrections and Rehabilitation (CDCR) death row list, 737 inmates are being granting temporary reprieves through this executive order, which is the largest in the nation. The order will also immediate close San Quentin State Prison's execution chamber and put an end to the state's continued efforts to find a constitutional method for lethal injection, The Los Angeles Times reported.

Newsom's executive order completely goes against voters' wishes throughout the state. Over the last five years, two different attempts have been made to repeal the death penalty. Both times, voters objected.

The other issue in pay is the constitutionality of the governor's executive order. Capital punishment is considered a legal penalty in the State of California. The California State Supreme Court initially outlawed the deal penalty in People v. Anderson in 1972. Shortly thereafter voters amended the State Constitution to make the death penalty legal.

Some are calling Newsom's decision an abuse of power.

Kent Scheidegger, legal director of the pro-death penalty Criminal Justice Legal Foundation, called Newsom’s actions “an abuse of power.” Although Newsom has the constitutional authority to grant reprieves to condemned inmates, he does not have the power to order the state Department of Corrections and Rehabilitation to shutter the death chamber or halt efforts to establish a lethal injection protocol, Scheidegger said.

California law requires corrections officials to maintain the ability to carry out executions, he added.

“He’s following in the footsteps of other governors who abused this power because they were frustrated by a law that they just personally disagreed with,” Scheidegger said.

With 24 inmates on death row who have exhausted their appeals, Newsom in February said he feared California could potentially execute “more prisoners than any other state in modern history” if no action was taken.

California has executed 13 people since the U.S. Supreme Court reinstated the death penalty in 1976. During that same time, 79 death row inmates have died of natural causes and 26 have died by suicide, according to the California Department of Corrections and Rehabilitation.

“As conservatives, we applaud Governor Newsom's decision because the death penalty violates our beliefs in limited government, fiscal responsibility, and the value of life. It is rife with errors and racial bias," Hannah Cox, National Manager of Conservatives Concerned About the Death Penalty, said in a statement. "The number of men and women on death row who suffer from severe mental illness or impairment is shocking. Capital punishment is a failure and big government at its worst, wasting millions of dollars that could be used to solve cold cases and to make communities safer.”