Here's How the Trumps Plan to Spend Christmas 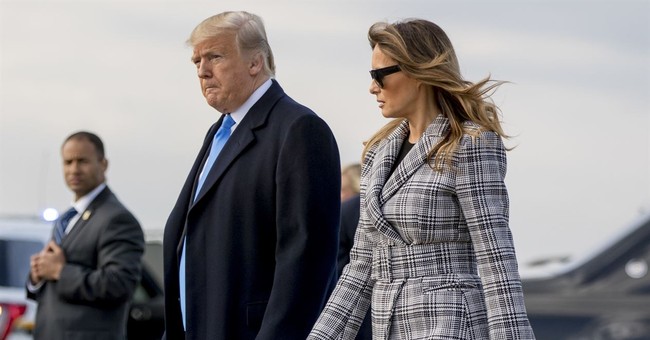 Because of the government shutdown that is looming, President Donald Trump plans to stay in Washington, D.C. First Lady Melania Trump is returning from Florida so the family can be together on Christmas.

“Due to the shutdown, President Trump will remain in Washington, D.C. and the First Lady will return from Florida so they can spend Christmas together,” White House press secretary Sarah Sanders said in a statement on Saturday.

The Senate plans to reconvene on Thurs., Dec. 27th. Senate Majority Leader Mitch McConnell (R-KY) said there will be no future votes on short-term spending bills, meaning the Democrats are going to have to come to a compromise with the Republicans.

Trump previously took to Twitter to remind Americans that he's working to come to a compromise.

I am in the White House, working hard. News reports concerning the Shutdown and Syria are mostly FAKE. We are negotiating with the Democrats on desperately needed Border Security (Gangs, Drugs, Human Trafficking & more) but it could be a long stay. On Syria, we were originally...

....going to be there for three months, and that was seven years ago - we never left. When I became President, ISIS was going wild. Now ISIS is largely defeated and other local countries, including Turkey, should be able to easily take care of whatever remains. We’re coming home!

He also made it known that he's not backing down for his border wall or immigration plans.

The crisis of illegal activity at our Southern Border is real and will not stop until we build a great Steel Barrier or Wall. Let work begin!