Report: FL Airport Shut Down Over 'Suspicious Package' That Ended Up Being Provisional Ballots? (VIDEO) 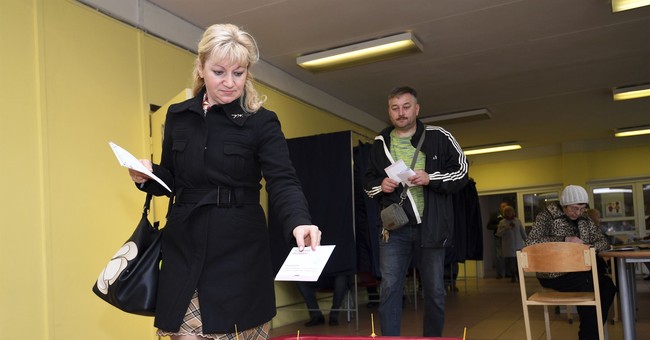 Late Sunday evening the Ft. Lauderdale Airport was shut down due to a suspicious package left outside of one of the terminals. Reports are coming in that an Avis rental car employee discovered provisional ballot boxes left in the back of a rental car that had just been returned by a Broward County employee.

Our deputies and bomb squad are responding to a report of a suspicious package outside @FLLFlyer Terminal 4. https://t.co/rEXixyrYX4

Laura Loomer and others working with her tried to gain access at the airport but was turned away by Broward County Sheriffs.

BREAKING: Source who is at FTL airport saying entrance to Car rental area is now blocked off.

This comes nearly an hour after an @Avis employee tipped off FDLE about finding a box of SOE supplies & a box marked “provisional”.

Then a “bomb threat” was called in shortly after. https://t.co/mD9Wzr5XOo

VIDEO: A police officer just told me the #FortLauderdale airport may be shut down for another 1 to 2 hours per the order of Broward Sheriff’s Office under Sheriff Scott Israel.

Even members of the media are being denied entry at the moment. #BrowardCounty pic.twitter.com/oDdBazaOpt

She did, however, have a source on scene, who provided her additional details.

Source who is inside the @Avis at Fort Lauderdale airport tells me that officers are now inside filling out paperwork looking at the boxes which reportedly are marked as SOE and “provisional”. Avis employee contacted FDLE after finding the boxes in a back of a rental.

I can also confirm the box found says “Provisional”.

I obtained video of the boxes and police responding inside the Avis.

I have the police report number too. https://t.co/07sXQOroDA

EXCLUSIVE PHOTO: An SOE box with the word “PROVISIONAL” was found by an @Avis employee in the back of a rental car at #FortLauderdaleAirport tonight. Last person to drive the car was a Broward County employee with @Broward.org email address. @browardsheriff responded to scene. pic.twitter.com/cAGE1e37xt

Did @browardsheriff Scott Israel order #FortLauderdale airport to be shut down over a “BOMB THREAT” to divert from the fact that an @Avis employee found a PROVISIONAL BALLOT BOX marked from Supervisor of Elections (SOE) tonight?#LOOMERED https://t.co/SN49nNEnpQ

Loomer said she had also been with State Committeeman Richard De Napoli before arriving on scene.

.@RichardDeNapoli and I have been in contact all night as soon as I got word of the provisional box. I spoke with him while he was inside the @Avis office at Fort Lauderdale Airport tonight.

I am going to interview him tonight and share the video with all of you shortly. https://t.co/EdjaxT36bz

She then released a video of the encounter De Napoli had with BSO:

EXCLUSIVE VIDEO: @Avis employee at #FortLauderdaleAirport discovered a PROVISIONAL BALLOT BOX in the back of a rental car.@browardsheriff had bomb squad shut down the airport, but they never reported on the ballot box!

Last driver of car was a Broward employee! #StopTheSteal pic.twitter.com/XkpXp8x6Cx

And followed up with this question:

.@RichardDeNapoli, a Broward GOP State Committeeman arrived on scene before police blocked off the entrance to the airport and was able to get video of @browardsheriff officers responding to @Avis to document ballot box. Why did BSO shut down the airport over a fake bomb scare?

Are we about to see even more election fraud in Broward County?