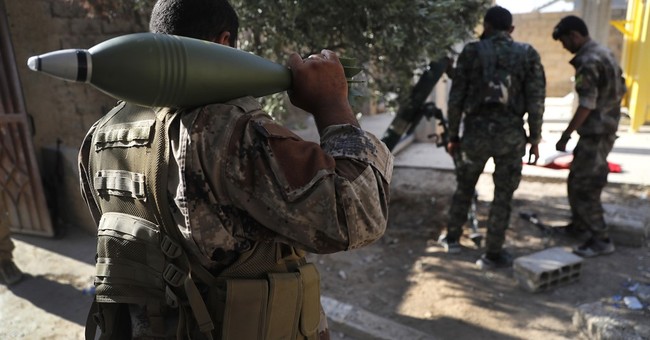 Syrian Democratic Forces have retaken nearly half of Raqqa, the ISIS “capital,” since the Kurdish soldiers’ first assault on the city on June 6. Backed by the U.S., their progress has still slowed down because of ISIS planted explosives and the extremists’ fighting.

Now the forces have fought their way to the “old quarter,” and the old citadel, according to the AP. Moving east and west, the forces have to move about 800 meters till they meet in the middle, gaining more of the city.

According to Army Col. Ryan Dillan, the U.S.-led coalition spokesperson, the forces now have 45 percent of the city, fighting “stiff, sporadic resistance.”

ISIS is losing on every front – on the battlefield, in recruiting, on social media, and generating money. #DefeatDaesh

Ursula Mueller, a senior U.N. humanitarian official, said there was no way for the 20,000 to 50,000 civilians to get out of Raqqa. More than 30,000 people have become displaced this month due to the assault on the city.

Nisreen Abdulla, of the Women’s Protection Units  (YPJ) and the Kurdish spokeswoman said that the difficult situation for Kurds also shows ISIS’ desperation, as they send more suicide bombers:

“Raqqa has become a booby-trapped city and this shows their weakness,” Abdullah said to AP. “They are also using civilians as human shields and this is slowing down the push as well.”

Jihad Khabat said that they “find tunnels every 100 meters,” from which ISIS attacks, hiding under the city.

While the Syrian forces have captured much of the city, Nazlet Shehadeh and Panorama Square in recent days, the fighting is still difficult.

“It was not easy, we have casualties and martyrs,” said Mustafa Bali, head of the SDF media center.