Bush Warns GOP on Perils of Isolationism, GOP is 'Leaderless' 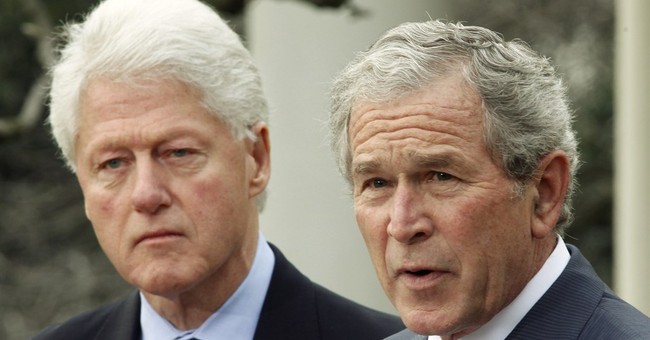 Former President George W. Bush has warned the Republican Party against adapting an isolationist foreign policy that is gaining popularity among members of the Tea Party.

“Democracies take time to evolve and it seems like the role of those of us living in comfortable free societies ought to take an interest in the evolution of democracy for our own national security, much less for improving the human condition,” the commander-in-chief that launched wars in Afghanistan and Iraq told Fox News at the dedication of his new presidential library in Dallas.

Bush told Fox that hearing about the Boston bombings caused him to think back to the lesson of 9/11.

“The lesson of Boston is that evil exists and there are people who willingly murder innocent people, and therefore, the country—sadly— can never let its guard down.” “The tendency is want to be comfortable, not think about terror and not to walk around worried that tomorrow will be another attack but defending the homeland is incredibly difficult to do,” he said. “We had to be right 100 percent of the time and they had to be right one.”

Former First Lady Laura Bush gave Fox  a tour of the Bush museum that is designed chronologically as the Bush presidency started as she explained that Bush began his presidency focused  primarily on domestic issues.

“The first section is what we thought we would be working on the whole time,” she said, “No Child Left Behind and Faith-based Initiative, Tax Cuts, the national book festival and the State dinner for Mexico—then 9/11, and it all changes.”

“I remember again how people came together, it is an important lesson. It is important for us to still come together.”

The enduring debate of how deeply America should involve itself overseas has only intensified as US political leaders seem unable to make big decisions necessary to stop U.S. debt from piling. Tea Party conservatives, in their pursuit of slashing taxes, lowering public spending  also champion a more isolationist foreign policy.

“Even bigger to me than the social issues is the idea of war,” Sen.  Rand Paul of Kentucky said in a recent speech. “If we didn’t have to be everywhere all the time, if maybe we tried to reserve it for when our national interests were impacted or a vital interest of ours was . . . [he left the thought unfinished] — and if Republicans didn’t seem so eager to go to war — I think we’d attract more young people.”

Paul would prefer “if we had a less bellicose approach, if we were for a strong defense but a little bit less aggressive defense around the world” and would like America to stop taking its international responsibilities so seriously because it costs taxpayers a lot of money.

A growing number of voters, primarily focused on pocketbook-domestic issues, have begun to advocate a return to isolationism and are becoming wary of military intervention overseas.

Most Americans would like to limit the US military presence when it comes to involvement in Syria and Afghanistan, according to surveys by the Media and Public Opinion Research Group  from December 2012 through March 2013.

More than a third of Americans say the US should limit its assistance to humanitarian aid in Syria, despite opposition groups openly revolting against the Assad government for two years. Less than a tenth of Americans think that the US military should be involved either through air strikes or ground troops.

Two thirds of Americans said that the US should leave Afghanistan, either gradually or immediately.

“The Arab Spring made it more, not less incumbent on the US to intervene abroad.” President Bush said. “Regime change has taken place in Iraq and Egypt and Tunisia and obviously the situation in Syria. The question is not whether or not people will want to get rid of tyranny. The question is what we will do when they do.”

“I wasn’t surprised when kids in Tahir Square made their voices heard. I was not surprised people in Tunisia got sick of corrupt government. They wanted a rightful place in society,” the 43rd President said. “What I hope doesn’t happen is that  the American people will  say it is none of our business  because the September 11th exhibit said it is our business—it matters here at home.”

President Bush also cautioned that the Republican Party has no leader and lacks a single individual to push the party in a specific direction.

“We are leaderless now,” he said. “The Republican Party is leaderless. It's not the first time we've been leaderless, nor will it be the last time a political party is leaderless. In other words, we've been in the wilderness and, pretty soon, our party will start coalescing around somebody to become our leader. I wish his name was Jeb. I have no idea if Jeb is going to run."

“Parties go in cycles and soon there will be a leader of both parties and the fundamental question will be they able to unite the parties behind a common mission and in a philosophy.”

Both Rand Paul and Jeb Bush are widely believed to be mulling runs for the presidency, so the debate between noninterventionism and engagement abroad is sure to remain with us at least through 2016.