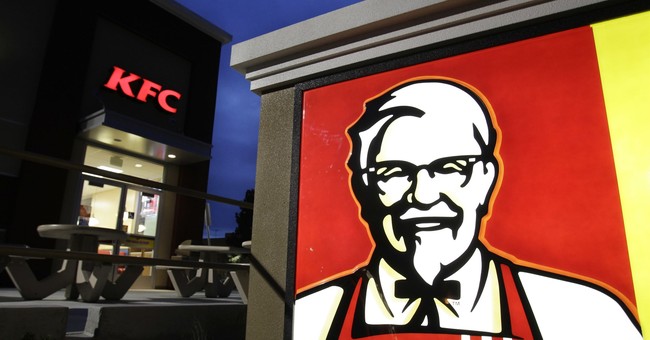 Earlier this week Townhall reported about Kentucky Fried Chicken’s planned test of “plant-based chicken.” Well apparently there is actually consumer interest in the iconic chain’s faux chicken offering because the meat-free concoction sold out within approximately five hours at the one store where it was available on Tuesday. The trial included nugget and boneless wing varieties of the product produced by the company Beyond Meat and dubbed “Beyond Fried Chicken.”

“In about five hours on Tuesday, a KFC representative said, the restaurant sold as many plant-based boneless wings and nuggets as it would sell of its popular popcorn chicken in an entire week,” the New York Times reported.

“They will ‘evaluate these results and customer feedback to determine the best way forward, potentially a larger test and/or a national rollout,’ the brand said in a statement,” according to Adweek.

KFC’s Beyond Fried Chicken is comprised of “wheat protein coated in a proprietary breading,” according to the Associated Press.

In KFC’s press release earlier this week the chain claimed that the meatless product would indeed taste like chicken.

One vegan who tried the product and posted about his experience on Twitter said “I would be hard-pressed to know that this wasn’t chicken if somebody didn’t tell me,” and he added that he was “very impressed.”

.@kfc's new vegan @BeyondMeat fried chicken has proven to be a smash hit in Atlanta. Now, a nationwide release is all but certain.https://t.co/4aaVU2fU72

Cars are wrapped around this KFC. I'm standing in a 1hr long line right now pic.twitter.com/d6v3Gr8ZER

I used to eat lots of chicken, and I really can't tell the difference. You're going to need lots of sauce with these! I recommend KFC use a little less breading in the future. Other than that, they passed my taste test ? pic.twitter.com/OAVYsFxDGx