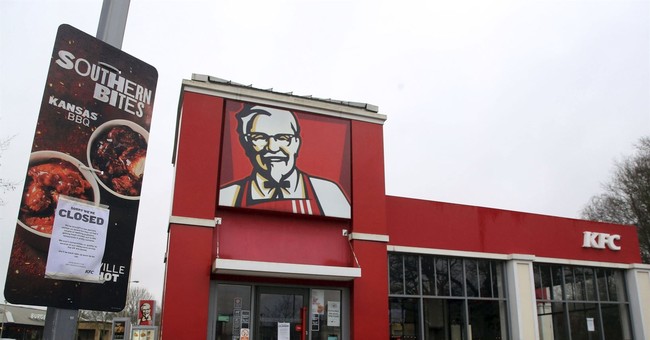 Starting tomorrow, people visiting at least one KFC restaurant will have a new entrée option with a conspicuously missing ingredient, namely, the chicken. An Atlanta KFC will begin offering “plant-based chicken” on August 27 and while it may be Kentucky fried, it definitely is not chicken.

According to a press release KFC will be “the first national U.S. QSR (quick service restaurant) to introduce a plant-based chicken, in partnership with Beyond Meat®. Beyond Fried Chicken™ will make its debut August 27 in a limited test.”

“The new plant-based Beyond Fried Chicken offers the finger lickin' good fried chicken flavor only KFC can deliver as a perfect choice for those searching for plant-based meat options on-the-go,” the company claims.

It’s Kentucky Fried Chicken but it’s made with @BeyondMeat. It’s confusing, but it’s also delicious. Feast on these Kentucky Fried miracles tomorrow while they last at KFC in Atlanta, Georgia. pic.twitter.com/lC5oYM1cmk

Anyone interested in sinking their teeth into this new offering will have the option of ordering nuggets or boneless wings. And KFC claims the new menu item will indeed taste like chicken:

Other companies like Del Taco and Carl’s Jr. have already ventured into offering Beyond Meat products.

“Our mission is to create The Future of Protein® – delicious plant-based burgers, sausage, crumbles, and more-- made directly from simple plant-based ingredients,” the Beyond Meat website says. “By shifting from animal, to plant-based meat, we are creating one savory solution that solves four growing issues attributed to livestock production: human health, climate change, constraints on natural resources and animal welfare.”

Those who are outside of the Atlanta area with a hankering for KFC sans the actual chicken could eventually find the product for sale at their hometown location. KFC’s press release says that, “Customer feedback from the Atlanta test will be considered as KFC evaluates a broader test or potential national rollout. ”