Here Are Some of the Reactions To Thursday’s Kavanaugh Hearing 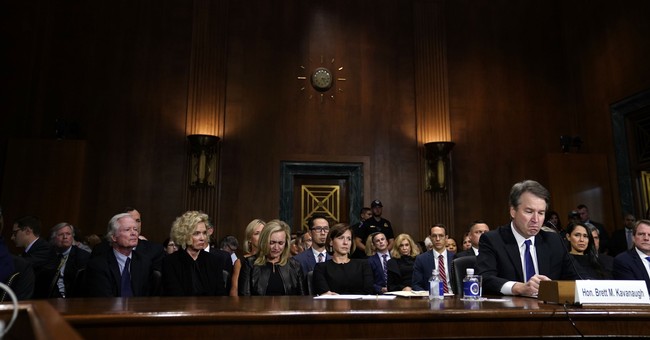 Judge Brett Kavanaugh and Dr. Christine Blasey Ford testified before the Senate Judiciary Committee on Thursday and there was no scarcity of commentary surrounding the national saga.

Referring to the fiery remarks Sen. Lindsey Graham (R-SC) delivered during the hearing, Dan Rather said that in the future people may view the Senator’s comments while learning about this time in history, as people today consider segregationist speeches while examining the Civil Rights period:

“It may very well be that Senator Graham's comments in the wake of Dr. Ford's testimony will be played in future documentaries of these times - sort of like we hear from segregationists when talking about the history of the Civil Rights era,” Rather tweeted.

White House Press Secretary Sarah Sanders lauded the South Carolina Senator for his comments, writing, “.@LindseyGrahamSC has more decency and courage than every Democrat member of the committee combined. God bless him.”

Dan Rather also tweeted that “Kavanaugh, by his words, actions, and demeanor right now is either a man who has been horribly wronged or a stunning personification of white, male, privilege on display. It is up for America and the Senators to decide which, especially in the wake of Dr. Ford's testimony.”

Sen. Kirsten Gillibrand (D-NY) said that Republicans lack concern for the truth and just seek to ram Kavanaugh through:

“The questioning from the Republican members of the Judiciary Committee made this clear: They have no interest in the truth. They only want to get through this and get Kavanaugh confirmed. It brings shame to the entire Senate and Supreme Court.”

She also praised Dr. Ford: “Staring at an all-male Senate majority, Dr. Ford gave a powerful, honest testimony of the lasting trauma Judge Kavanaugh has caused her. The bravery she’s demonstrated has made her a hero. To survivors of sexual assault, to women and to our country.”

A tweet on Senate Minority Leader Chuck Schumer’s (D-NY) official Twitter account states that “Dr. Ford’s testimony was courageous, difficult to hear, and grounded in the facts. Judge Kavanaugh was angry, defiant, and partisan.” And another tweet said: “If our Republican colleagues are so certain of Judge Kavanaugh’s story, they should immediately demand that the White House order the FBI to reopen the background investigation, and hold off on a vote for several days so all the facts can come out.”

Rep. Pramila Jayapal (D-WA) blasted Kavanaugh: “The more I watch, the more Kavanaugh's character emerges. Rude, arrogant and bullying seem to be his MOs. Why doesn't he just call for an FBI hearing? We would all be served by that. Including Kavanaugh. Unless he has something to hide.“She also tweeted, “As Kavanaugh keeps challenging Democratic Senators & continues his rudeness, he just is making the case crystal clear that he has no ability to be fair, courteous or evaluate any claims before him fairly if he were to be confirmed to the SC.”

Rep. Hakeem Jeffries (D-NY) also charged Kavanaugh with being rude, commenting, “This guy (so-called judge) is arrogant, rude and having a total meltdown at this hearing #StopKavanaugh”

“If Brett Kavanaugh can be this angry on national TV, imagine what he's like when he gets inebriated,” Rep. Ted Lieu (D-CA) tweeted. He also wrote that “Dr. Blasey Ford showed much more judicial temperament than Brett Kavanaugh in their opening statements.”

Rep. Barbara Lee (D-CA) said in a portion of a tweet that “Judge Kavanaugh should not be confirmed - and the fact that the Senate will proceed with a vote shows a deep disrespect for Dr. Blasey Ford, survivors of assault, and our democracy.”

President Donald Trump expressed support for his nominee while also slamming Democrats and calling for a vote:

“Judge Kavanaugh showed America exactly why I nominated him. His testimony was powerful, honest, and riveting. Democrats’ search and destroy strategy is disgraceful and this process has been a total sham and effort to delay, obstruct, and resist. The Senate must vote!”

Sen. Steve Daines (R-MT) released a statement in which he criticized Democrats and said that he will vote to confirm Kavanaugh:

“The Democrats turned this process into an embarrassing, political circus that will have lasting effects for generations to come. They should be ashamed. I look forward to casting my vote for Judge Kavanaugh.”

Sen. Tom Cotton (R-AR) tweeted that “Judge Kavanaugh gave compelling testimony, with specific and detailed recollection. His testimony is corroborated by multiple other statements and evidence. The Democrats’ disgraceful smear campaign of character assassination must come to an end. It’s time for the Senate to vote.”

The Senate Judiciary Committee is slated to vote Friday afternoon.