Graham Torches Democrats At Kavanaugh Hearing: You Want To Destroy This Guy's Life And Hope You Win in 2020 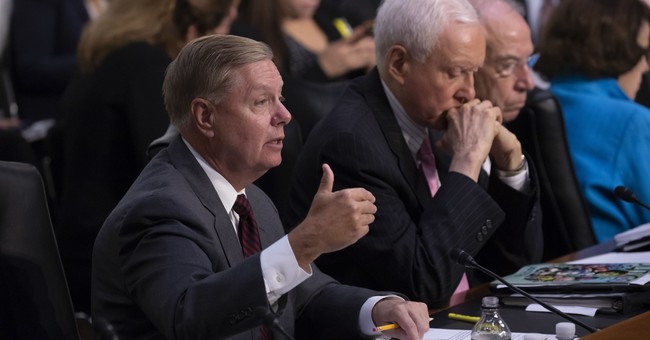 Sen. Lindsey Graham (R-SC) delivered a fiery and intense speech against Senate Democrats, accusing them, rightly, of trying to destroy Judge Brett Kavanaugh’s life in order to keep a Supreme Court seat vacant and hope they win in 2020. Graham decided to ask questions himself instead of the hired outside counsel, revealing what we all know is the Democratic Party’s plan. They want to delay. They want to run out the clock. And they want to derail this Supreme Court nomination by any means necessary.

Graham mentioned how he would never have pulled these antics when he was in the minority during  the Sotomayor and Kagan nominations.

“Boy, y’all want power I hope you never get it,” Graham said looking at Senate Democrats

"You're looking for a fair process? You came to the wrong town at the wrong time, my friend,” Graham lamented to Kavanaugh, who gave an emotional speech defending his character from this left wing smear campaign.

He closed by urging his Republican colleagues to vote in favor of this nomination, and that if they don’t, they would be complicit in legitimizing this character assassination.

“To my Republican colleagues, if you vote no, you're legitimizing the most despicable thing I have seen in my time in politics,” he said. He added that the judge has nothing to apologize for.

“You had no intention of protecting Dr. Ford. None. She is as much of a victim as you are,” he yelled. It's been widely assumed that Democrats leaked the letter sent to Sen. Dianne Feinstein's (D-CA) office, which was delivered in July. The Democrats sat on this allegation that was baseless, evidence-free, and without witnesses, but dropped it at the 11th hour.

Thus far, the Democrats have gone on a pathetic line of questioning that always reverts back to their FBI investigation talking point that have been undercut by…Joe Biden (again.) Oh, and they want to know if he drank beer.