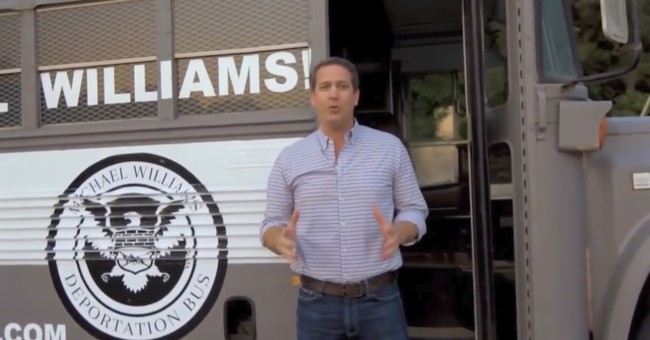 One of the windows on the back of the bus contains a message that reads: “Danger! Murderers, Rapists, Kidnappers, Child Molesters, And Other Criminals On Board.” Another window says, “Follow Me To Mexico.”

According to his Facebook post the tour was scheduled to begin on Wednesday, passing through “each of Georgia’s dangerous sanctuary cities: Clarkston, Decatur, and Athens.” The post continued, “Throughout his bus tour of sanctuary cities, Williams will expose how dangerous illegal aliens ruin local economies, cost American jobs, increase healthcare costs, and lower education standards.”

CNN stated that “State legislators in Georgia passed a law banning sanctuary cities in 2009, but some local governments in the state have policies that are more sympathetic to immigrants.”

WSB-TV said that the city of Clarkston “is a self-described sanctuary city.” The Center for Immigration Studies lists two areas in Georgia on its list of sanctuary jurisdictions: Clayton County and DeKalb County.

“We’re gonna implement my 287(g) deportation plan that’s gonna fill this bus with illegals to send them back to where they came from,” Williams declared in his video.