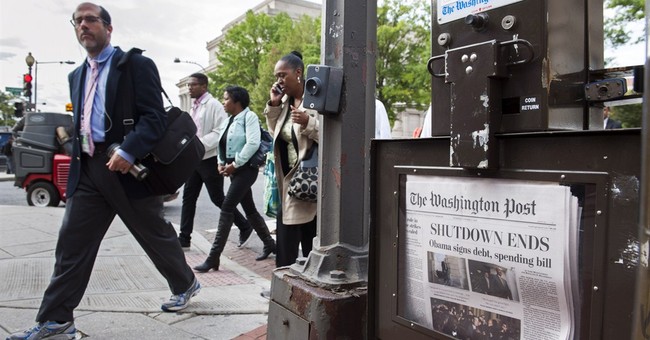 Until the media steps up its game, we shouldn’t expect voters to be any more informed. Salem Radio Network's Tom Tradup reports for the December issue of Townhall Magazine.

By the time you read this, barring a likely runoff in Louisiana, we’ll know whether the Republicans have retaken control of the U.S. Senate and which governors were elected or defeated in the 2014 midterms. However, no matter what the outcome, those on the losing side will be quick to blame a familiar straw man: the so-called low-information voter.

This is the linear equivalent of assigning blame to Bigfoot or the Loch Ness Monster. I contend the real culprit is America’s low-information media.

Given the sad fact that the average political candidate today runs what Matt Kibbe of FreedomWorks calls “very risk-averse, almost listless” campaigns, voters seeking to be informed about a candidate’s positions on major issues have essentially three options: print, broadcast, or online media outlets. Each, unfortunately, falls rather far from the ideal concept of journalism. They do not promote a free and open exchange of ideas and opinions.

The Association of Educators in Journalism and Mass Communications recently called for setting aside a so-called National News Engagement Day to encourage the public to “engage with the news and overcome barriers” so folks make engaging in the news media more of a “priority.” Why is this needed in 2014?

Let’s unlock the mystery for editors, news directors, and J-school professors who are scratching their collective heads over “low-information voters” tuning them out.

Thanks to proponents of so-called advocacy journalism, for decades facts have been sacrificed on the altar of political correctness by many of America’s newspapers and magazines. One need look no further than the classic Washington Post headline in November 1972: “Nixon Wins 10 Eastern States, Loses Mass., D.C.”

And that was back when there were “standards” for journalists. Today, “reporting” (once thought of as objective) openly ridicules those who homeschool their children, or oppose same sex marriage, or have doubts about so-called climate change. This leaves fact-seeking consumers with little reason to purchase the Denver Post or the Dallas Morning News unless they need a jumbo crossword puzzle or some nice tire ads in the sports section. But for potential voters? Slim pickings.

Television, the medium former FCC commissioner Newton Minnow once referred to as a “vast wasteland,” has finally lived up to his broadside. Network morning shows like “TODAY” and “Good Morning America” stumble all over themselves to outdo one another with style-over-substance, jockeying to be first with reality TV show interviews, special rooms dedicated to reading tweets from viewers, and anchor-focused features such as Savannah Guthrie’s on-air “baby shower” for herself on NBC. Or, CNN giving Piers Morgan a cable-TV platform to hysterically flog Americans night-after-night for months over their constitutionally-guaranteed right to own firearms before finally showing Piers the door.

The three “major” network newscasts, once the crown jewel media properties, are now presided over by Brian Williams, Scott Pelley, and David Muir—three white male anchors presenting breathy reports about “glass ceilings” and lack of diversity in the American workplace. Where’s the credibility?

As for talk radio, critics blast the format as nothing more than angry and ill-informed men and women who regularly gather around their radios and subtract from the sum total of human knowledge. The electronic town hall, the pure democracy of anyone with a cellphone being able to address a nationwide audience, is marginalized and mocked by “progressives” and those who don’t like the ‘message,’ so they blame the messenger (Rush Limbaugh should at least be given a little credit as the most effective fundraising tool for Democrats).

Digital and social media—websites, blogs, Twitter, podcasts—make newspapers, TV, and talk radio seem on a par with the Gutenberg Bible: Instantaneous, anonymous “reporting” with political slanting to please the most discriminating palates, from DRUDGE and The Blaze on the Right to Salon and Huffington Post on the Left.

We don’t characterize starving children in Guatemala or Haiti as low-consuming diners because they barely subsist on half a cup of rice a day. That’s all they have at their disposal. To blame them for being malnourished would be myopic and cruel.

I contend that the comical and baseless myth of the low-information voter obfuscates the real, ongoing, and growing issue that threatened not only this year’s elections but also the very essence of our democracy. The low-information media must end. And America needs to be reacquainted with the lost art of actual reporting, rather than leaving news gathering to agenda-driven, activist reporters and editors shaping and dictating the content of America’s “news.”

Tom Tradup is Vice President of the Dallas-based Salem Radio Network. He can be reached at ttradup@srnradio.com