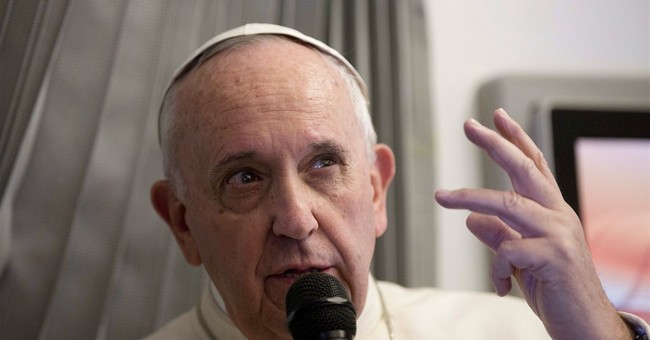 Even free speech has its limits when it comes to religion, according to Pope Francis.

The Roman Catholic Pontiff made the assertion Thursday when he discussed the recent Islamic-fueled terrorist attacks in Paris. While the Pope condemned all violence under the name of God as an "aberration," he didn't exactly evoke confidence in the Western World.

Not only did he suggest that free speech is not always free, but he also indicated that provocation naturally results in violence. From the AP:

There are so many people who speak badly about religions or other religions, who make fun of them, who make a game out of the religions of others. They are provocateurs. And what happens to them is what would happen to Dr. Gasparri if he says a curse word against my mother. There is a limit.”

While the Vatican’s goal might have been to insight respect for religion, this analogy goes too far. The Pope suggests that if you insult someone you “can expect a punch.”

This goes against the very purpose of free speech. Ideas and thoughts should not be limited. What is regulated (for the public's safety) is what you do with those ideas and how you react to other people.