Democrats Hope Anti-Trump Anger Will Clinch State Level Wins, But Some Of Their Candidates Are Not Ready For Primetime 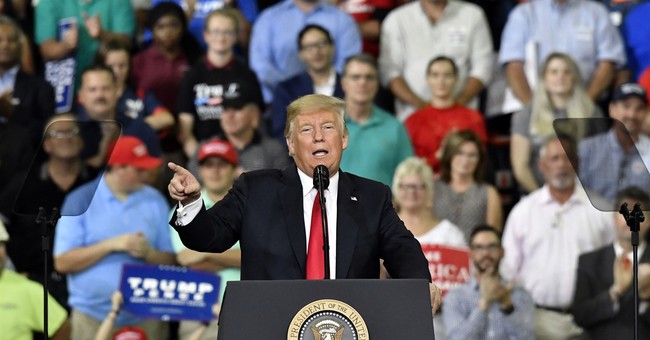 Well, we have another poll showing that Donald Trump’s disapproval rating is around 60 percent. We also have another news flash: his supporters don’t care. The president’s approval rating, while not the best, has been remarkably stable hovering in the mid-to-high 40s. And yes, Barack Obama was re-elected with similar approval numbers. After a slew of what the Democrat-media complex calls bad news for the Trump White House and nothing changes, what makes you think this poll will have any meaningful impact with his base.  It won’t. Democrats hate him and real Republicans love him. Yet, that doesn’t mean Democrats are using those disapproval numbers to fuel hopes that they can not only clinch the House this year, but also state level races, which they’ve performed miserably since Obama was elected. The New York Times noted Democrats are hoping for possible wins at the state level in July, thank to anti-Trump anger:

A polarizing president electrifies the opposition party going into his first midterm election, raising the party’s hopes that it can reclaim governorships, ram through major policy change at the state level and redraw legislative lines in its favor for a decade to come.

It’s a scenario both political parties have seen before, most recently in 2010, when out-of-power Republicans rode the Tea Party-led wave against the Obama administration to smashing victories across the country.

In a series of interviews, Republican and Democratic governors said opposition to Mr. Trump had galvanized liberal and many moderate voters, leading to a sizable intensity gap between the two parties. Mr. Trump has been seeking to close that political deficit for his party, leveraging the fierce loyalty of the Republican base in the remaining months of the election, while the Democrats are working to keep their base focused on channeling their anger in the midterms.

Corey Platt, a strategist for the governors, laid out a map of 18 Republican-controlled states where Democrats could conceivably take power, including five important Midwestern battlegrounds and traditionally conservative-leaning states like Tennessee and Georgia.

Yet Mr. Trump remains hugely popular within the Republican Party, to a degree that even candidates in purple states are wary of seeking too much distance from him. And the president’s enduring bond with rank-and-file conservatives could make him a crucial ally for Republicans in red states, like South Carolina and Oklahoma, where Democrats are trying to break through.

Republicans also still have crucial structural advantages: The economy is roaring in many of the states where they hold power, the political committee led by Mr. Haslam has $87.5 million to spend on the midterms, and in state legislative elections, Republicans are shielded by gerrymandered district lines.

Yet, there’s also another slate of state offices that are just as important: attorney general. Lieutenant governor, attorney general, and secretary of state are the trifecta to keeping a healthy candidate bench. The state level is the pool where new talent for higher federal office is found. For attorney general, whose races often go underreported, the dominance of Republicans at the state level is evident in the war chests for these contests: $21 million raised for 2018, with $8.6 million cash on hand. Democrats have raised only $1.9 million. The GOP controls 28 attorney general offices. In Ohio, Michigan, and Nevada—three key states this cycle up and down the ballot, the Democrats seem to have found candidates, though ones not really set for primetime. This summer has been, well, a rather bad cycle for their slate here.

In Michigan, we have Democratic attorney general candidate Dana Nessel, remember her? This was her pitch to voters in 2017:

“When you're choosing Michigan's next attorney general, ask yourself this: Who can you trust most not to show you their penis in a professional setting?

“Is it the candidate who doesn't have a penis?

This came in light of the Me Too moment, where scores of bad men were exposed for their bad behavior. It’s crude—as was this exchange between a GOP tracker and a Nessel supporter in last month. The tracker is a champ taking the abuse from this unhinged woman, ignoring her, while continuing to do his job—which is a typical method in opposition research [WARNING: some graphic language]:

In May, Nessel attended a fundraiser, where she took a rather cavalier attitude when referencing former New York Attorney General Eric Schneiderman, who resigned in disgrace after multiple allegations of domestic abuse.

“I have to tailor my speech a little bit because for a long time I talked about wanting to model myself after the New York Attorney General Eric Schneiderman, so I should probably stop saying that, she said.

In Nevada, Aaron Ford, the Democratic candidate for attorney general, has paid his taxes—and he owes a lot (via Las Vegas Journal-Review):

The Democratic nominee in the race to become Nevada’s top prosecutor has a history of failing to fully pay his taxes, public records show.

The IRS filed three liens against Aaron Ford, the Democratic nominee in the race for attorney general and current state Senate majority leader, for what amounted to more than $185,000 in unpaid taxes, interest and penalties from 2010, 2011, 2012 and 2013, according to Clark County records.

The federal government released the three liens against Ford in early 2016, according to IRS notices filed with the county.

In Ohio, Steve Dettelbach was hit with a complaint after he held a fundraiser in his race for attorney general. He was raffling off a chance to meet with former Attorney General Eric Holder. The only problem: it’s illegal to have a political raffle.

Mark Miller, a citizen activist, says Dettelbach's fundraiser was actually an "illegal scheme of chance." Miller filed the complaint with the help of Finney Law Firm, which has represented Republicans in previous legal challenges.

At church picnics, school fundraisers and charity auctions, Ohioans raising money will raffle off everything from all-expense paid vacations to baskets of sports trinkets.

"I would urge him not to have a raffle because it is probably illegal," said Hamilton County Prosecutor Joe Deters, a Republican, told The Enquirer. Conducting an illegal raffle is a misdemeanor offense under Ohio law.

The Ohio GOP had fun with this one:

After news broke that @SteveDettelbach was running an illegal raffle to meet Eric "fast and furious" Holder, the fundraising page was mysteriously taken down...https://t.co/3s3USPOqrY pic.twitter.com/5qSVt7kRZA

To many, these races aren’t notable. They’re not exciting. They’re not in the news often. That doesn’t make them any less critical.  Where do you think the legal actions against Obama’s economically ruinous Clean Power Plan, Obamacare, and DACA are rooted?  On the Left, The Trump Foundation is in the crosshairs thanks to the New York Attorney General’s Office. Recently, Texas Attorney General Ken Paxton scored a huge win against the IRS over the Obamacare taxes, recouping hundreds of millions of dollars:

Attorney General Ken Paxton today commended a U.S. District Court decision ordering the Internal Revenue Service to repay Texas and five other states more than $839 million because of an unlawful Obamacare tax on state Medicaid programs. Of that total amount, Texas stands to be repaid $304,730,608.

“Obamacare is unconstitutional, plain and simple,” Attorney General Paxton said. “We all know that the feds cannot tax the states, and we’re proud to return this illegally collected money to the people of Texas.”