On The Attack: Israel Launches Wide Offensive Against Hamas in Gaza 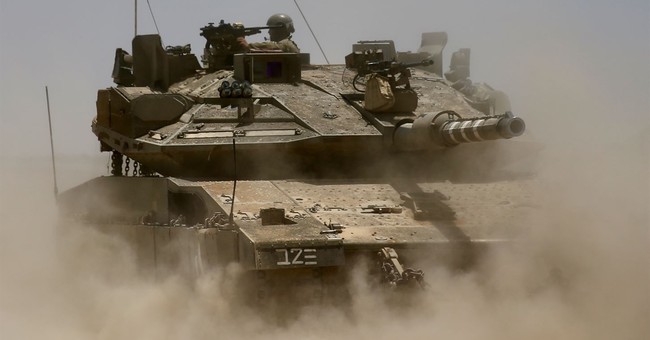 The situation in the Middle East erupted today, as Israel launched a “wide-scale attack” against terrorists in the Gaza Strip. An Israeli soldier was killed by a Palestinian sniper, which prompted the attack (via NBC News):

Israeli military officials said a "terrorist squad" fired at troops, killing one soldier. The military did not specify the condition of the other soldiers who came under fire.

"Hamas chose to escalate the security situation — and will bear the consequences for its actions," the Israel Defense Forces said in a statement, later tweeting that its fighter jets had struck 15 targets, including "weaponry warehouses" and "equipment storage."

Weekly clashes at the Israel-Gaza border have kept tensions high for months. More than 130 Palestinians have been killed by Israeli fire since the protests started on March 30.

The protests are partly meant to draw attention to the Israeli-Egyptian blockade imposed after Hamas took control of Gaza in 2007.

Yeah, on a side note, Hamas is a terrorist organization. I know you know this, but it seems the mainstream media always forgets to make this a point. Also, most killed in these so-called protests—attacks really—were terrorists.  And the four Palestinians killed were confirmed by Haaretzto be members of Hamas’ armed wing—the al-Qassam Brigades. The publications added that 25 targets have been hit by the Israeli military. The air operation is reported to be some of the most intense since the 2014 incursion (via NYT):

Israeli warplanes pounded the Gaza Strip on Friday after a Palestinian sniper killed an Israeli soldier along the border fence. Israeli security experts said the aerial assault was one of the most intense since a cease-fire ended 50 days of fighting in the territory in 2014.

Successive explosions rocked Gaza City at nightfall and streets emptied as warplanes struck sites that Israel said belonged to the military wing of Hamas, the Islamist group that controls Gaza. The ferocity of the bombings raised fears that the hostilities could spiral into a war.

Prime Minister Benjamin Netanyahu of Israel and his defense minister, Avigdor Lieberman, arrived at military headquarters in Tel Aviv on Friday night for emergency meetings with top officials, a highly unusual event for the start of Sabbath.

On the Israeli side of the border, the authorities instructed residents to remain close to bomb shelters as they braced for retaliatory rocket fire from Gaza. The military this week placed batteries of its Iron Dome anti-rocket missile defense system in several locations in central Israel.

Brig. Gen. Ronen Manelis, the chief spokesman for the Israeli military, blamed Hamas for escalating tensions over the past three and a half months, since the beginning of the Hamas-orchestrated mass protests along the border fence. He said the response to Friday’s killing of the soldier along the fence — the first Israeli fatality in the Gaza border area in four years — would be “very severe.”