Marina Medvin
|
Posted: May 14, 2018 3:07 PM
Share   Tweet
The opinions expressed by columnists are their own and do not necessarily represent the views of Townhall.com. 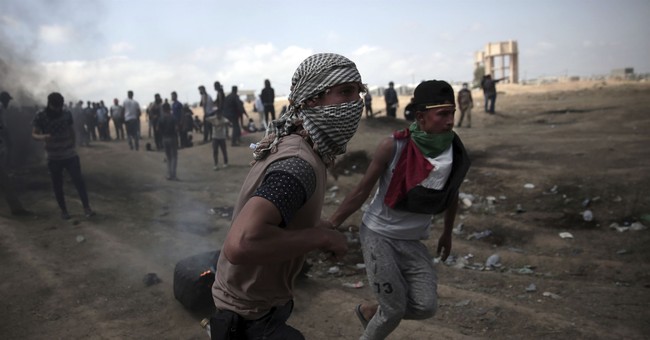 Mainstream media is at it again, promulgating fake news.

I woke up this morning to a slew of stories about “Palestinian Protestors Killed in Gaza Protests.” The imagery of a man holding up a cardboard sign while getting shot comes to mind, from such a headline, doesn’t it? I became concerned, read further.

CNN: “37 Palestinians killed in Gaza protests ahead of US embassy opening”

These articles carry inflammatory titles. But the story doesn’t match the headlines.

The story reported by all is that Hamas-led violence leads to Israel firing back. Hamas-backed Palestinians “set tires on fire, sending plumes of black smoke into the air, and hurled firebombs and stones toward Israeli troops across the border,” according to the LA Times (and every other news organization). Fox News explained that at least 3 were killed because they were armed terrorists who were stopped before they detonated a bomb. Mainstream media is also reporting growing numbers of dead and injured, numbers provided to them by the “Gaza Ministry of Health.”

Let’s start at the beginning. Hamas is designated a terrorist organization by the U.S.

A TERRORIST ORGANIZATION. Let that sink in.

Vox, while leaving out that whole “terrorist organization” designation, still explains, “Hamas is a Palestinian Islamist political organization and militant group that has waged war on Israel since the group's 1987 founding, most notably through suicide bombings and rocket attacks.” Moreover, “Hamas's charter long called for the destruction of Israel,” and “Hamas led the charge in using suicide bombings against Israel.”

Okay, so Hamas, which leads this month’s violent acts against Israel has been around for a while and has had the same hatred and goals in mind. Why hasn’t CNN reported these individuals as terrorists? Or called Hamas violent? Or called rioting, rioting?  Why is is CNN instead reporting this as “protest?”

A protestor is defined in the English language as “someone who shows that they disagree with something by standing somewhere, shouting, carrying signs, etc.,” according to the Cambridge Dictionary. Violent is defined as "using or involving force to hurt or attack:” So why is the CNN headline conveying that Palestinians are being shot at while just shouting or carrying signs, when in fact the story is that Israel is responding to force and attacks? Why is CNN not calling them violent, but is instead attempting to insinuate peaceful action? Israel, the center of ceaseless critique when engaging in careful defense of its citizens (which include Muslims, Christians, and Jews), surely doesn’t care to fire on someone who is just yelling.

What about these numbers reported by the “Gaza Ministry of Health” - can we trust these numbers? The Gaza Ministry of Health is run by Hamas. These are the same people who train their children to be suicide bombers, use summer camps to train children to kill Israelis, and who create cartoons to teach toddlers to “shoot Jews” - amongst just some of their pro-war activities. Well, Hamas LIES about death tolls as well, to promulgate their anti-Jewish agenda. So how can we trust this information? Why do CNN and mainstream media trust Hamas-reported numbers when the U.S. News & World Report calls Hamas liars? Why does CNN intentionally conceal that the Gaza Ministry of Health is run by Hamas?

The media’s biased reporting on Israel is nothing new. It has been a staple of liberal media reporting. Anti-Israel bias is also rampant amongst Democrat politicians. Even some liberals cannot understand it, calling it a double-standard. Howard Kurtz uses some very appropriate terminology when he discusses the media’s double-standard on Trump reporting in his new book Media Madness, calling the media’s biased reporting a “decimation of original reporting.” “The lines between news and opinion were not just blurred, they were all but obliterated,” Kurtz writes. That exact bias is all too familiar in the reporting of Israeli defense against Palestinian violence. Just as mainstream media has been irresponsibly spreading fake news about Trump, so too have they been spreading lies about Israel - vilifying Israel and victimizing Palestinian aggression.

If you would like unbiased insight into the Israeli-Palestinian conflict, I suggest you read analysis by self-proclaimed left-wing Arab, Fred Maroun.

But until the media stops with the fake news, take heed what you read.