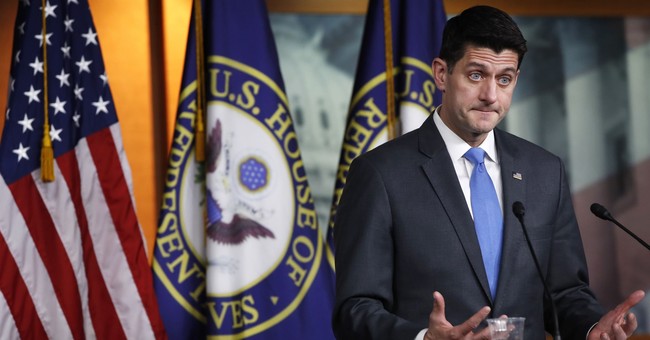 UPDATE: House delays vote on compromise bill until Friday. The more conservative Goodlatte bill will be voted on later this afternoon.

Every Democrat signed onto this discharge petition effort that would have allowed immigration votes without going through the House GOP leadership. Moderate Republicans joined that effort and this petition could have been triggered. They were three votes shy, but last week the House leadership said votes on these two bills would be held. The compromise Border Security and Immigration Reform Act, crafted by the GOP leadership, and the more conservative Goodlatte bill, also know as the Securing America’s Future Act, spearheaded by Rep. Bob Goodlatte (R-VA), chair of the House Judiciary Committee. The differences you can read about here. For recipients of the Deferred Action for Childhood Arrivals program under Obama, a constitutionally questionable program, Goodlatte’s bill offers three-year renewable temporary protection status to around 800,000 illegals, with path to a green card. The compromise bill grants protections to 1.8 million people, with a chance to obtain a green card upon the sixth year. It’s an eventual pathway to citizenship.

As the immigration bill flounders in the House, Trump invites a tieless Kevin McCarthy on stage in Duluth.

At this writing, neither Hse immigration bill appears to have the votes to pass. The Goodlatte bill is probably in the 160-170 yea column. The leadership bill is closer than that, but the whipping is being described as “uphill.”

Where we are on immigration, as of now
- Both House GOP bills likely to fail tomorrow
- In the Senate, Republicans have proposed bills dealing narrowly with family separation -- and Dems have their own plan. None have votes to pass yet
- Bipartisan talks just starting in Senate

President Trump met with GOP leaders on Tuesday. The Trump White House says they support both bills, but at last glance it looks like both bills don’t have the votes. It’s total chaos (via Roll Call):

GOP leaders appear unlikely to shore up enough votes on either immigration bill by vote time, but they showed no signs of planning to delay the votes until a bill can pass, as they did with health care.

Some aspects of the bills overlap, but one of the main differences between the Goodlatte bill and the compromise measure is how they treat the Deferred Action for Childhood Arrivals program.

The Goodlatte measure would provide the roughly 700,000 young undocumented immigrants covered by DACA with indefinite renewals of nonimmigrant legal status. The compromise bill starts with that as a base, but extends to a wider population of 1.8 million Dreamers and provides them with the opportunity to apply for a special visa from which they could apply for permanent legal status and eventually citizenship.

It was no secret that the whip check conducted on the compromise measure Tuesday night — just after President Donald Trump met with the Republican Conference to express his support for the legislation — came up short and that leadership was working to get undecided members on board.

“Today we have a lot of work to do, which is par for the course for any big bill,” Majority Whip Steve Scalise told reporters Wednesday morning.

If there’s full attendance for the vote, the threshold for passage would be 215 votes. That means GOP leaders can’t lose more than 20 Republicans if all Democrats oppose the bill, which appears likely.

More than a dozen members said they planned to vote “no” or were leaning that way.

“We really don’t do anything to address sanctuary cities in this bill ... to frankly help the federal government enforce the law better, except for more funding on visa overstays,” Freedom Caucus member Warren Davidson said of why he was leaning no.

In the Senate, both Democrats and Republican have a plan to deal with family separation at the border, but those don’t look like they have to votes to pass either. Senate Minority Leader Chuck Schumer said he opposes any measure that seeks to ameliorate the issue concerning family separation at the border. Still, the Senate will push a package they think will resolve the issue, despite President Trump’s executive order on family separation. They feel legislation is needed to address the matter, as an executive order can get overturned or bogged down in legal fights. Trump also personally assured House members that he backs either bill, saying he would not strand them in the wilderness (via Politico):

During the Tuesday night meeting, Trump told the GOP Conference he would accept either of two competing immigration bills slated for a vote this week: a conservative measure that appeals to immigration hard-liners but repels moderate Republicans, or the negotiated so-called compromise bill that the leadership released last week.

Trump sought to reassure Republicans that he would not undercut them if they voted for the compromise bill, which includes a pathway to citizenship for Dreamers.

Several Hse GOPers have expressed to Fox their disgust with the President taking a potshot at GOP SC Rep Sanford last night. “It was ridiculous,” said one member of the Freedom Caucus. “It cost him votes (on the immigration bill).”

Now, during the Tuesday meeting, Trump took some swipes at soon-to-be-ex-Congressman Mark Sanford (R-SC), who lost to an unabashed pro-Trump insurgent. Supposedly these remarks cost him some votes. Did it kill it? C’mon, this was always going to be a massive undertaking, and the odds were never in favor of passage. In all situations, there doesn’t seem to be enough votes to pass any piece of legislation on immigration. Not one. So, do we pull the bills or do we grab some soda, popcorn, and watch the Hindenburg crash and burn?

Well, as of writing this post, the vote count for the Goodlatte bill is between 140-160 and the compromise bill has between 160-190 votes, according to someone familiar with House leadership negotiations.

Right now, "They don’t have the votes to even pass a rule to bring a bill to the floor," this person told Townhall. "[Speaker] Ryan’s operation is a clown car. These vote counts are all because of his lack of leadership."