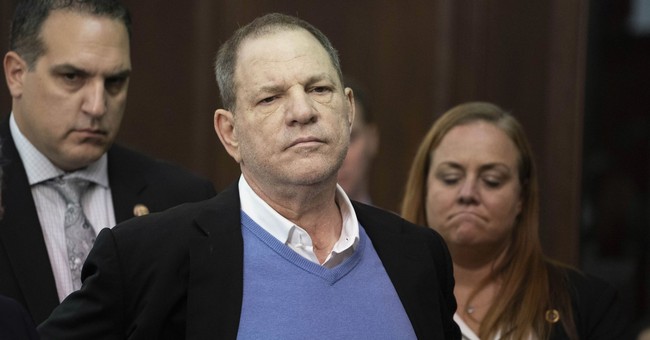 He thought his politics could save him. He’s doing an anti-National Rifle Association movie; cut him some slack, right? Sadly, for a lot of liberals, that’s their go-to when one of their allies gets in trouble. He votes the right way, or as the right opinions, he’s cool. Well, this year, women in the workplace had enough, spilling their experiences with sexual harassment at work. Some cases involved inappropriate remarks and groping, while others went as far as sexual assault. For former Hollywood big shot Harvey Weinstein, it’s the latter. He was indicted on rape charges. Actresses Asia Argento, Rose McGowan, and Paz De La Huerta have all alleged Weinstein had raped them. Since his history of bad behavior has been exposed, he’s lost his production company and has been expelled from Academy of Motion Picture Arts and Sciences (via Reuters):

Movie producer Harvey Weinstein was indicted on Wednesday on charges of rape and a criminal sexual act, Manhattan District Attorney Cyrus Vance said, the first case to emerge from a slew of sexual misconduct allegations against him.

“This indictment brings the defendant another step closer to accountability for the crimes of violence with which he is now charged,” Vance said in a statement on the charges against the disgraced 66-year-old co-founder of the Miramax film studio and the Weinstein Co.

The grand jury indictment follows his arrest and court appearance last Friday on charges related to two among about 70 women who have accused him of sexual misconduct, all of which Weinstein has denied.

Ben Brafman, the head of Weinstein’s legal team, said his client would plead not guilty and defend himself against the charges.

If convicted on the most serious charges, Weinstein could face between five and 25 years in prison.

Weinstein turned himself in last Friday. The Manhattan District Attorney’s office was preparing arrest warrants, but he decided to turn himself over to the police.