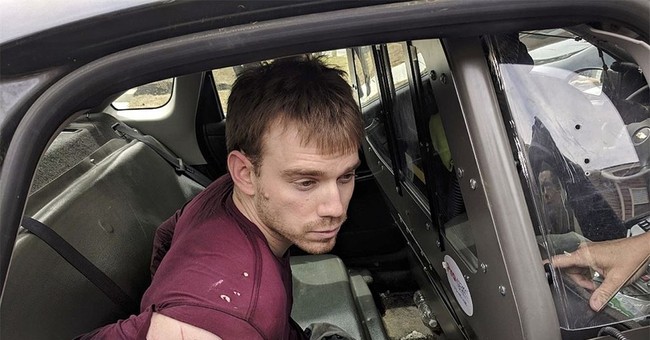 Folks, it seems we have yet another instance where a mass shooting could have been prevented. On early Sunday, around 3:30 A.M., 29-year-old Travis Reinking walked into a Waffle House in Antioch, Tennessee. Four people were killed and several others were injured. Reinking reportedly walked in naked and opened fire with an AR-15 rifle. James Shaw, Jr., a customer at the Waffle House, charged Reinking, disarmed him, and threw his rifle over the counter. By then, Reinking had fled where he remained at large until Monday afternoon. He has since been taken into custody.

While this story will certainly be used to push for more gun control, there doesn’t appear to be any policy that could have stopped this man. It’s another case of a person who shouldn’t have owned firearms, another person who appears to have serious mental issues, and someone who was known to law enforcement. So, how was Reinking able to commit this shooting? Well, his father gave him back the weapons, which were confiscated by police after he arrested by the Secret Service last year.

NEW INFO about suspected shooter: Travis Reinking was arrested by Secret Service in July for being in restricted area of White House. AR-15 used today had been seized after that, but IL law enforcement returned it to his father who gave it back to Reinking. pic.twitter.com/owdzbe0GaI

Reinking thought Taylor Swift was stalking him, said people were after him, committed indecent exposure at a local pool, and threatened someone with his AR-15 last year. Even his father said that he had taken Reinking’s firearms when his son was “having problems.” To top it all off, Reinking was arrested by the Secret Service in 2017 as well. That’s what led to his Illinois firearm authorization card to be revoked. He was arrested outside of the White House in an attempt to speak with President Trump (via AP):

Special Agent Todd Hudson in Nashville says Travis Reinking "wanted to set up a meeting with the president."

Hudson says Reinking tried to cross bike racks near the White House grounds that were part of security barriers. Reinking was asked to leave the restricted area, and when he declined, Hudson says he was arrested on a charge of unlawful entry.

Reinking, who is from Morton, Illinois, was subsequently released and was later interviewed by the FBI and authorities in Tazewell County, Illinois.

Here's a history of Reinking's run-ins with the law, along with the many signs that he was possibly mentally unstable (via Tennesseean) [emphasis mine]:

On Aug. 24, 2017, sheriffs deputies in Tazewell County, Illinois took a state-issued card from Reinking that Illinois requires for someone to own a weapon. During a Sunday news conference streamed online, Tazewell County Sheriff Robert M. Huston said Reinking volunteered to give up his four weapons.

"He was allowed to do that after he assured deputies he would keep them secure and away from Travis," Huston said, referring to Reinking's father.

Anderson said he believes under Illinois law, guns seized can be returned to someone who has a valid state authorization.

Anderson said he was not immediately aware of any Tennessee law Reinking would have violated by possessing guns in Nashville.

This is not the first time Reinking's father returned weapons to his son after concerns about Reinking's state of mind.

In May 2016, the Tazewell Sheriff's Office responded to a call involving Reinking, according to police reports obtained by the Peoria Journal Star. Reinking told law enforcement he thought Swift was stalking him. Law enforcement took Reinking to a local hospital for an evaluation.

In June 2017, police records state Reinking threatened someone with an AR-15 while wearing a pink dress. After threatening the man, Reinking drove to a public pool and dove in before exposing himself to others at the pool, according to the reports.

When police contacted Reinking's father, the father said "awhile back he took 3 rifles and a hand gun away and locked them up when Travis was having problems. (The father) wanted to move out of state so he gave them back to (Travis)…” the reports state.

Police told Reinking's father “he might want to lock the guns back up until Travis gets mental help which he stated he would."

No one at the pool wanted to press charges, police reports states.

The next month, Reinking was arrested at the White House.

Oh, and days prior to the shooting, April 17, he stole a BMW and evaded police who gave chase. Reinking’s father is facing possible charges for giving the firearms confiscated from his son back to him (via WaPo):

Unbelievably irresponsible father. Infuriating that he returned a rifle to his son after police stripped said son of arms after son forfeited his rights via willful criminal action. https://t.co/CXM1SQRS14

Reinking’s father could potentially face charges for returning the guns, according to the Bureau of Alcohol, Tobacco, Firearms and Explosives. His father and other relatives could not immediately be reached, and a woman who answered the phone at a number registered to Reinking’s relatives in Illinois said, “We have no comment.”

More recently, police said, Reinking had stolen a BMW from a dealership in suburban Nashville just four days before the Waffle House shooting. He eluded police officers who later recovered the vehicle at his apartment complex.

Reinking went to a Brentwood, Tenn., BMW dealership, asked about purchasing a car, took a keyfob and drove away, authorities said. Police in Brentwood followed him but gave up on the search, because it was rush hour and the car could be tracked through its GPS, according to Aaron; they later used that system to find the car at his apartment complex.

“They had no idea who the man was,” [Don] Aaron [spokesman for the Metropolitan Nashville Police Department] said, noting that Reinking refused to give identification to the dealership, so they did not have his name. After the shooting, a keyfob for the BMW was found in Reinking’s apartment, he said. Police in Brentwood said charges are pending in the case.

Reinking was arrested near the apartment complex where he lived thanks to a tip. At least 160 law enforcement officials were involved in the search (via NYT):

About 160 law enforcement officials had been involved in the search for the suspect, Travis Reinking, 29, who officials said used an AR-15 rifle to carry out a rampage at a restaurant southeast of downtown on Sunday morning.

The police said they arrested Mr. Reinking on Monday afternoon in a wooded area near the apartment complex where he lived after receiving a tip from a member of the public, bringing an end to a manhunt that had stretched into its second day. Lt. Carlos Lara of the Nashville police said Mr. Reinking was carrying a backpack that contained a handgun, ammunition and a holster.