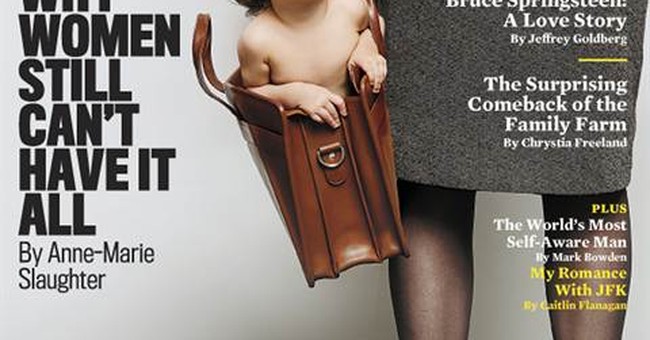 Other items have made me hold off on The Atlantic’s hiring (and now firing) of conservative Kevin D. Williamson, which set off a 8.0 Richter scale triggering from progressive circles. You’d think that a neo-Nazi was added to the payroll of the magazine. Why? Well, because Mr. Williamson has opinions, conservative ones—and he articulates them eloquently on the pages of his columns. He said this about women who had abortions (See Update), but the Left, overall, is playing the Williamson said this, that, and the other game, which is what happens when you get into the weeds with them. It’s your typical liberal social media mob. Well, alas, they’ve succeeded. The pressure was just too much; the magazine fired Williamson today (via The Wrap):

“Kevin is a gifted writer, and he has been nothing but professional in all of our interactions. But I have come to the conclusion that The Atlantic is not the best fit for his talents, and so we are parting ways,” said editor-in-chief Jeffrey Goldberg in an email to staff on Thursday.

Late yesterday afternoon, information came to our attention that has caused us to reconsider this relationship. Specifically, the subject of one of Kevin’s most controversial tweets was also a centerpiece of a podcast discussion in which Kevin explained his views on the subject of the death penalty and abortion,” wrote Goldberg.

“The language he used in this podcast–and in my conversations with him in recent days–made it clear that the original tweet did, in fact, represent his carefully considered views,” he added.

While Goldberg himself once trumpeted Williamson’s hire from the National Review, the writer immediately drew outrage — particularly over a tweet in which he argued that women who had had an abortion should face the death penalty. Williamson defenders — and Goldberg himself — had argued that his career should not be judged on an errant tweet.

I didn’t expect I’d see the @nytimes stand stronger for diversity of thought than @TheAtlantic, but there you have it. The Times’ editors are more willing than @JeffreyGoldberg to stand up to bullies.

Report: @TheAtlantic has already fired Kevin Williamson. This strikes me as a terrible, respect-losing move on the editor's part.

In other news, Jeffrey Goldberg reached an amicable agreement with liberal Atlantic staffers to give them his lunch money.

I know Kevin will be fine. But I hope this is a long-term stain on @jeffreygoldberg and @TheAtlantic. What a disgrace.

So, Williamson was just too deplorable to keep around. That’s troubling. So what if he has controversial views? Isn’t that the point of The Atlantic, which is to have a clash of ideas? Something that Williamson’s colleague David French mentioned when the mobs began to form, the pitchforks grabbed, and the torches raised:

The proper way to evaluate a writer is through a body of work. The proper response to essays, pieces, tweets, and paragraphs you don’t like is to push back. I’ve strongly criticized those very words from Coates. I’ve criticized many of his ideas, and when he’s made me think (and he often does), I’ve noted that as well. That’s what a marketplace of ideas is all about. “Your ideas are wrong” is a long, long way from “you shouldn’t work here.”

And that brings us to the heart of the problem. Writers like Weissmann and Jones would no doubt say that they don’t want to silence Williamson, they just don’t think he belongs at The Atlantic. It’s as if they see The Atlantic or the Times or the Post as being on “their” team — and it seems as if many staffers on those publications agree. You see it in the sneering response I saw yesterday on Twitter. “How many liberals has National Review hired?”

We’ve likely hired roughly as many liberals as Mother Jones or The Nation has hired conservatives. After all, we’re an explicitly and intentionally conservative journal. Our very purpose centers around the debate, discussion, and exploration of conservative ideas. If you’re equating National Review and The Atlantic, then you’re giving the game away.

If strongly left-leaning but not specifically ideologically-purposed entities such as the Times, the Post, or The Atlantic do as their critics seem to wish and cleanse their pages of conservative voices their critics deem unacceptable, then the loss to American intellectual life will be immense. Writers who wish to enjoy intellectual freedom will soon find that they’re only truly “free” when working with people of like mind — a condition that contributes immeasurably to cocooning, polarization, and intellectual stagnation.

Decide now, progressives, do you want any serious intellectual media space where conservative and progressive ideas clash? If you do, then you just might have to endure life alongside immense talents like my friend Kevin Williamson.

French also added that the addition of Megan McArdle to The Washington Post and Bari Weiss and Bret Stephens to The New York Times caused some heartburn on the Left as well, though there are notable differences. One is that all three are still employed at their respective publications. Second, they’re not really conservative. Stephens has called for the repeal of the Second Amendment, Weiss is described as liberal on some issues, more right leaning on others (like the Israeli-Palestinian conflict), and McArdle is more of a libertarian. Yet, he mentions something else that’s eye opening. One of The Atlantic’s writers,Ta-Nehisi Coates, is the antithesis of Williamson. Unapologetically liberal in his views, Coates said that Williamson is one of his favorite writers. He said this to National Review’s Jamie Weinstein on his podcast (via The Federalist):

“He can write his a– off! I don’t agree with sh-t he says, but –if you can write, I will always look at what you’re doing, because at the very least I can study some sh-t and figure out, maybe there’s something for me, in this,” he added. “Even if I hate what you’re saying, or I think you’re dead wrong.”

That sentiment was obviously not exhibited by the magazine’s front office, which sent Williamson packing after just one column. And what’s more is that Coates also has very controversial opinions as well, like when he said 9/11 responders weren’t human.

This is an @TheAtlantic *approved* writer talking about 9/11 first responders who died while trying to save innocent victims. But Kevin Williamson got fired. pic.twitter.com/xAwuNvWi2z

No one raises an eyebrow when a columnist defends the eugenic extermination of unborn children with Down syndrome. But a pro-life columnist is fired for expressing his views in a controversial way. Unbelievable.

"We remain committed to grappling with complex moral issues in our journalism...as long as you grapple with them exactly the way we want you to." https://t.co/zQu2oGvIVW

Alexandra DeSanctis also noted that while Williamson’s death penalty initiative for women who have abortions is extreme, isn’t it the same for those who think it’s perfectly fine to kill babies because they have Down Syndrome? The Daily Wire’s Ben Shapiro noted two things with Williamson’s firing; this is how we got Trump and how the this leads to total nutjobs becoming mainstreamed since it reinforces conservatives’ need to band together for defense—no matter who is in the ranks:

Kevin Williamson’s firing is how you got Trump, as well as the alt-right’s near-mainstreaming. Here’s why. (/1)

The Left continues to radically narrow the Overton Window - the spectrum of acceptable discourse. (2/)

They separate discourse into two categories: the acceptable and the unacceptable. Then they shrink the acceptable down to the opinions located between Hillary Clinton and Bernie Sanders. (3/)

This necessarily places Kevin Williamson and @bariweiss and @SamHarrisOrg and me and everyone else the Left finds unpalatable into the “excluded” category. (4/)

But the unacceptable category is already populated by those who are actually unacceptable: alt-right trolls, for example. (5/)

This means that the population of opinion in the unacceptable category - let’s call them Deplorables, since the Left does - come to be a majority by way of exclusion. (6/)

But counting on the virtue of people you’ve just deemed unacceptable not to band together against you is both stupid and unrealistic over time. (8/)

Which means the Left is doing something unethical here, and deeply dishonest - and something that is likely to foster polarization that results in the mainstreaming of truly gross opinions. (9/)

This is how you get a reactionary movement willing to countenance alt-right evil: you tell people they’re part of the alt-right when they’re not, and treat them as such no matter how much of a lie that is. (10/)

What just happened to Kevin Williamson leads conservatives to side with anyone the Left casts out, good or bad, merely as a form of protection. That shouldn’t happen. But it does. And the Left causes it with this bulls***. (END)

So, the Left has scalped Mr. Williamson, though I’m sure he’ll land on his feet somewhere soon. In this End of Discussion battle, the Left won—but tomorrow is a new day.

Since people are still lying about what Kevin Williamson said. Here were tweets from the controversial thread in 2014 where he makes clear the point he was making & who it would apply to. pic.twitter.com/6pQQAxxUVd

To translate: Kevin believes abortion is murder. He believes the law should be changed to treat it like other types of murder. He does not believe in punishing people who follow the law now.

I disagree with this, but it's not an outrageous view worthy of denying a platform.

Of course I am generally against even playing this game of explaining because you could takes tweets from almost anyone from years ago and make them look bad, that's why these mobs are insane and should be dismissed.