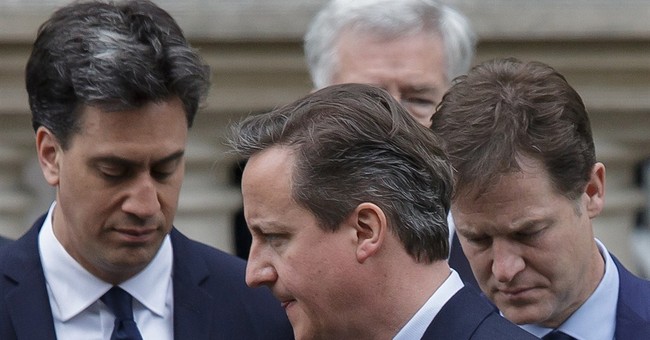 Supporters of the Labour party decided to riot after Prime Minister David Cameron and the Conservative Party won the latest UK election. Katie and Christine reported on the abject lunacy and debauchery of the misguided explosion of emotions that saw World War II memorials defaced. It was an ugly scene. To make things all the more bizarre, the hashtag #ToriesOut was blasted on Twitter. As Christine noted, this social media campaign should have happened days, even months, before Brits went to the polls last week.

Yes, not everyone is supportive of the riots (thank god). Some members of the Labour Party have voiced their disgust over the left’s reaction to the election result. The Telegraph’s Bryony Gordon, a Labour supporter, said that voters of her party should be “ashamed” of the antics the followed–and that Ed Miliband showed nothing but grace and dignity when he resigned as Labour leader. After a bruising campaign, his last official function was standing next to Prime Minister Cameron and soon-to-be ex-Leader of the Liberal Democrats, Nick Clegg, as they gathered to remember the 70th anniversary of Victory in Europe (VE) Day. Moreover, Gordon was able to tragicomically point out the frivolousness of the protester’s grievances, which ranged from hypocrisy to ignorance:

Less than 24 hours later, anti-Tory protestors had desecrated the Women of World War Two memorial on Whitehall. “F*** Tory Scum” was the charming note left in red graffiti. Laurie Penny, a darling of the Left, tweeted that she didn’t have a problem with the vandalism – she argued that the real vandals were sitting in Downing Street, breaking up the welfare state.

Elsewhere on social media, Labour supporters spent much of Friday laying in to anyone who had voted Conservative. “Who are these ***** who voted Tory?” wrote one friend on Facebook. “To the selfish morons who voted for Cameron et al: I hope you are proud of yourselves,” wrote another. “I hope you enjoy your slightly lower taxes, you shameless, shameless human beings.”

Meanwhile, at the Baftas, a series of stinking rich actors in expensive frocks and suits lamented the return of the Tories before heading off to drink champagne at a lavish after party. And speaking of champagne, a picture of a man delivering a zillion crates of Moet to number 11 Downing Street started to go viral. “Tory austerity in all its glory” was the gist of the accompanying commentary.

Except the picture was taken in 2004, and the champagne was being delivered to Gordon Brown (anyone who has been to Downing Street in the last five years knows full well that they’re only allowed to serve wine that tastes like cat’s urine).

But the keyboard warriors didn’t have time to answer charges of hypocrisy. They were too busy bashing out angry tweets about the fact that only 37 per cent voted Tory, that a different voting system is needed – perhaps something similar to the one in place in, say, North Korea, that would only allow the British public to take part in the ballot if they happen to be left of centre.

Of course, proportional representation would still have given us a Tory government – just one in coalition with Ukip. Is that what the people marching on Westminster want?

Of course, Gordon makes the claim that social media has facilitated and exacerbated the vitriol currently seen when political discussions emerge on these platforms. I tend to agree that these platforms are partially responsible in the breakdown of having a conversation with the other side, but we need to be weary of blaming all of this on the Internet. It may seem to be majority troll, but the people who shout the loudest, or tweet/post the most outrageous things, usually get the lion’s share of media coverage. In a realm of communication that grows every day, it’s a tad hasty to think that the majority of people are just there to denigrate one another. At the same time, conservatives, especially women who lean to the right, might disagree with that assumption given that they’re bombarded with misogyny, sexism, and threats of rape and violence from lefty wingnuts on a daily basis. Nevertheless, Gordon makes a good case:

I don’t think it is Tory voters who should feel shy and ashamed – it is Labour voters, and I write that as one of them. (Please don’t think badly of me; we have a very good Labour MP where I live in south London.)

Writing off 11.3 million people as nothing more than Tory scum is both insulting and arrogant. But then perhaps it is merely a symptom of the blinkers that social media has put on us.

There is something profoundly cruel about vilifying a person for their democratic choices. When normal people become targets instead of politicians, something has gone very wrong.

Yet, Europe is slightly more to the left than America. That being said, liberalism, especially in its current form, is highly driven by emotions, which is a standard that can be applied on both sides of the pond. Yet, conservatives in America didn’t riot when Barack Obama was nauseatingly re-elected in 2012. I remember being furious Election Night, but I got over it. There were no tanks in the streets, and Republicans certainly didn’t riot and desecrate war memorials out of some petulant tantrum spurned from a political ideology that can be best described as Ron Burgundy screaming he’s in a glass case of emotion.

Yet, there were some liberals on election night 2012, like Katherine Goldstein of Vanity Fair, who were also quite appalled by the liberal schadenfreude over social media:

When George Bush won re-election in 2004, I felt like the world was going to end. I called my parents that night, crying about how devastating this was for the country. The next day, my dear friend and I were driving outside campus, nearly hysterical over the results. She ran a stop sign on the side of a school bus sign neither of us saw through our tears and got a $200 traffic ticket. I had just turned 21. My vote for Kerry was the first I’d ever cast, and boy did losing hurt. But there was no one to around to rub my face in my own misery.

If there is one thing in this whole country that liberals and conservatives can agree on, it’s that we live in a deeply polarized, angry, divided nation. Social media seems to encourage blasting our basest feelings to everyone we know, and it’s caused some of us to totally mute our human sense of empathy. If I had logged into 2012-style Facebook and Twitter at the depths of my own political despair in 2004, I can only imagine how painful it would have been to be see strangers and friends alike basking in my pain. Frankly, I think it would have made it even harder for me to let go of my political wounds and move on. It would have just made me that much angrier.

There’s plenty I disagree with Republicans about, but they are (slightly less than) half the country. Liberals need to pipe down. Ruthlessly delighting in Republican sadness will not help bring anyone together to make the most of Obama’s second term. There’s plenty to celebrate, like this, this and this, without putting anyone down.

Also, there’s a simple way to avoid the lowest of the low on social media, don’t feed the trolls. Period.