Koch Bros: You Know, We May Back Several Candidates In the GOP Primaries 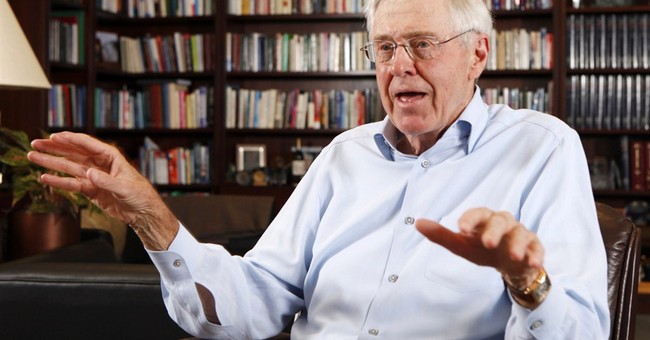 So, you know how the Koch brothers will give Jeb Bush a chance to fall into their good graces. Now, they could be backing at least several candidates during the GOP primaries before they settle on their number one choice. After all, Republican voters have an extensive menu regarding candidates next year. Nevertheless, even if the vast resources of the Koch brothers are spread amongst several candidates, it could make for a battle royale regarding the moderate, Tea Party, conservatarian, and conservative wings to articulate their vision after Barack Obama. As Ed Morrissey wrote in The Week, we have “the luxury of choice;” let’s maximize that opportunity.

Yes, Jeb Bush will probably drive conservatives up the wall on Common Core and immigration; the pro-defense wing of the GOP will have a coronary over Sen. Rand Paul’s (R-KY) foreign policy, moderates will balk at Sen. Ted Cruz (R-TX); and the libertarians will go wild for Rand. It may be tiresome, but all the factions in the GOP are pretty much represented by a serious candidate this cycle. Why not have that debate–and have the Koch brothers, along with the Republican National Committee and other right-leaning super PACs sustain that effort? It could be fun.

The Koch brothers haven’t raised the money yet, but their goal for this two-year budget is to raise $900 million, about a third would be devoted to the 2016 elections, including state elections (via USA Today):

[Charles] Koch, his brother David and their team have identified five candidates who have the right message and "a good chance of getting elected," he told USA TODAY in an exclusive interview at Koch Industries' headquarters. They are Wisconsin Gov. Scott Walker, former Florida governor Jeb Bush and Sens. Ted Cruz of Texas, Rand Paul of Kentucky and Marco Rubio of Florida.

For the first time, Charles Koch also outlined what share of his network's staggering $900 million, two-year budget would be devoted to politics. He said only a third of that amount — roughly $300 million — would be spent directly on electoral politics in 2016, including federal and state elections. He said there's no breakdown of exactly how the political portion of the budget will be divided.

The $300 million would rival the almost $400 million the Republican National Committee raised and spent in the 2012 election cycle.

"A good part of the rest is education and research," Koch said, ticking off university grants and other projects he is supporting, including an overhaul of the criminal justice system.

Koch repeatedly emphasized the importance of a candidate with a positive message.

"Only if somebody really stands out from the standpoint of their message and what they would actually do to benefit America and has a chance a decent chance of being elected, only then would we select one over the others," Koch said.

"We may give several of them some money to get this positive message out," he said.

"We haven't raised the money," Charles Koch said of the $900 million budget.

"This is just a figure out there."

Casino tycoon Sheldon Adelson pretty much kept the Newt Gingrich train running with a mere $5-10 million donation to his super PAC. This could be a prolonged debate (or bloodbath) if the Kochs share part of their projected $300 million war chest with several candidates. And I don’t mean that in a bad way; the Kochs are doing nothing wrong, unless you feel exercising your First Amendment rights is … a bad thing.

The 2012 GOP field was meh. The 2016 field has talent, depth, and more charisma–we should want a passionate debate with all the players involved.